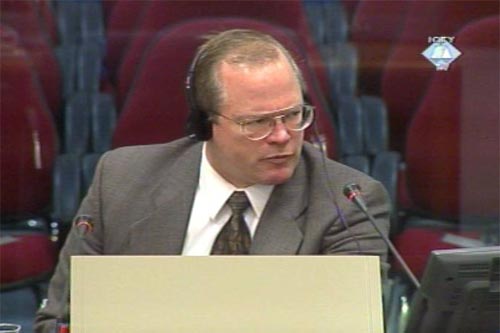 Rex Dudley, defense witness for Oric
Lieutenant Colonel Rex Dudley, American intelligence officer, arrived in Srebrenica in March 1993 in the UNPROFOR advance team to make preparations for the subsequent arrival of General Morillon and the delivery of humanitarian aid to the enclave.

Testifying at the trial of Naser Oric, Dudley confirmed that he had found the exhausted and starving populace in Srebrenica. Those people were "ready to do anything" just to survive. With them were the few fighters who were trying to protect the people and defend the town surrounded by Bosnian Serb forces, the witness described.

"I put the soldiers into three categories," Dudley said today, explaining that the first comprised professional, well-trained soldiers. The second category comprised reservists, fighters who had received some training but needed additional military training, while the third one comprised civilians who had taken up arms without even the most basic military training. The fighters in Srebrenica mostly belonged to the third category, Dudley said.

The same went for military equipment. Very few fighters had any uniforms. They did not wear any rank or unit insignia, the American officer confirmed. He added that he had seen "all kinds of weapons: from hunting rifles, mostly shotguns, to 22 mm caliber rifles, pretty much useless in those conditions, to Kalashnikovs". The fighters, Dudley claims, resembled "partisans more than an organized army".

The American officer doesn't think that "any commander would be able to control the situation in Srebrenica". He described how the crowds of refugees, driven by hunger, had caused trouble all the time by foraging on their own. The fighters could do nothing to prevent them.

When asked by Oric's defense counsel, British attorney John Jones who the most important people in Srebrenica had been, Dudley said those had been the members of the War Presidency. He knew two of them. Apart from them, there were the leaders of the "semi-autonomous armed groups" and the police, who were "locally involved in maintaining law and order".

Dudley claims he doesn't remember having seen Naser Oric in Srebrenica, but that he heard his name several times. He could not identify him from the photograph shown to him by defense counsel. He did say that the soldier on the photograph had similar gear to that worn by American troops – from his belt to the camouflage uniform.

The defense will continue the examination of the American officer, in the presence of two representatives of the US government. This was stipulated as a condition for his testimony. The prosecution should complete the cross-examination by tomorrow.