Naser Oric's defense is trying to prove that the destruction of villages in the wider Srebrenica area in the attacks by Muslim forces was the result of "military necessity". A defense witness claims many of the villages sustained additional damage in counter-attacks launched by Serb forces 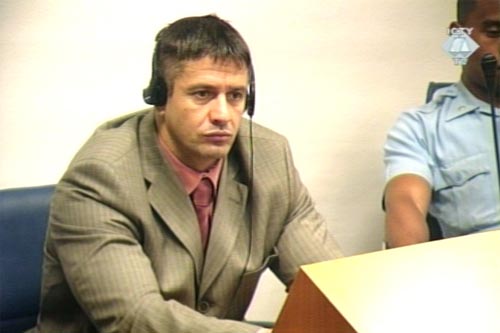 Naser Oric in the courtroom
In an attempt to challenge the allegation in the indictment that the destruction of the Serb villages in the Bratunac and Srebrenica region was "not justified by military necessity", Naser Oric's defense called Suad Smajlovic to testify. The former leader of one of the armed Muslim groups in the environs of Srebrenica described the attack on Bjelovac, one of about a dozen villages listed in the indictment.

The witness claims that a large Serb force was stationed in Bjelovac in December 1992, consisting of the troops from the Bratunac Brigade, the Red Berets from Serbia, soldiers from Krajina and special units under the command of Mugos and Kokara. According to him the village houses were legitimate military targets, because major artillery pieces were positioned in them or around them.

Smajlovic confirmed the defense argument that the Muslims civilians known as torbari were also partly responsible for the destruction of the villages, because they entered the houses after the soldiers had left, searching for food. "No one could stop the civilians in their forays," the witness said, adding that he himself had been wounded in an attempt to prevent the torbari from getting into a barn in Bjelovac where Serb soldiers had been.

Apart from constant attacks on the Muslim villages in the Podrinje area, the Serb forces launched a counter-offensive in mid-January 1993 to regain the areas captured by the Muslims "during the short-lived success" of their operations in the winter of 1992/1993.

In the course of the counter-offensive, Serbs attacked the Serb villages in Muslim hands, the witness claimed. The witness claims that Bjelovac, Kravica and all its hamlets were destroyed in those attacks. "They razed everything to the ground with their guns, howitzers and tanks," Smajlovic said.

To corroborate the claim, the defense submitted a number of VRS documents with orders for the attacks on both Muslim villages and Serb villages held by Muslims. They also showed an intercept in which Ratko Mladic issues an order to "open fire on all the surrounding villages, but not on Srebrenica" immediately before Srebrenica was demilitarized. UN observers were in Srebrenica at the time. "Fire on live flesh and don't worry. Apart from a few pitiful rifles, they have no weapons," Mladic said at the time.