"SETTING THE STAGE FOR GENOCIDE"

Naser Oric's defense witness, former Venezuelan ambassador to the UN, now special adviser to the UN Secretary-General, accuses the international community it did nothing to prevent the genocide in Srebrenica 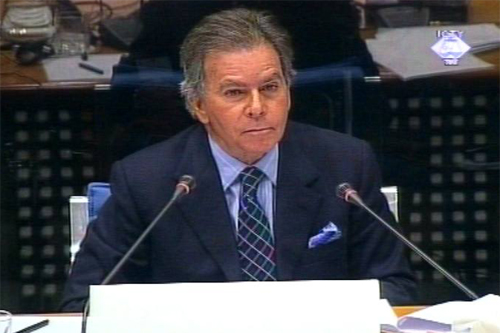 Diego Arria, defense witness for Oric
There was a "gradual genocide" in Srebrenica, Diego Arria said, testifying as Naser Oric's defense witness. Arria served as the Venezuelan ambassador to the UN from 1991 to 1993. Today he is a special adviser to the UN Secretary-General. Ambassador Arria, who initiated the visit of the UN Security Council delegation to Srebrenica in April 1993, and was at its head, described the situation in the enclave as "genocide in slow motion".

Shocking images of poverty, destruction, starvation and squalor were hidden from the public. As the Venezuelan ambassador testified, this was done with the collusion of the UNPROFOR troops deployed in the enclave declared a "protected area" a little while ago. Arria took the first photographs of the destruction of Srebrenica and its starving inhabitants. Those were the only photographs in existence at the time. He refused to hand over his camera to UN members.

After Arria confirmed he stood by all his previous statements, the defense tendered into evidence his statement to the OTP investigators from 2003 and the transcript of his testimony in the Milosevic case in February 2004.

The international community "did not move its little finger" to protect the Muslims in the enclave and "did not make it possible for them to defend themselves", Ambassador Arria said today, openly accusing the then UN Secretary General Boutros Ghali and his staff of withholding the reports about the real situation in Srebrenica and misinforming the Security Council.

The report on the "humanitarian disaster in Srebrenica", Arria claims, appeared before the Security Council 12 days after the dramatic appeal by the then UN High Commissioner for Refugees, Sadako Ogata. There was a tendency in the Security Council, he said, to "morally equate the victims and the aggressor", thus avoiding the need to take action to prevent the humanitarian disaster.

The Venezuelan diplomat claims that the blue helmets in the enclave did nothing to prevent the "gradual genocide". Quite the contrary, during the visit of the Security Council delegation to Srebrenica, the then UNPROFOR commander, Brigadier Hayes did all he could to prevent them from seeing the real situation and the truth about the area which had already been officially declared as "protected".

As he said, the international community had been hoping, before the declaration of the safe haven, that the Serbs would overrun the enclave quickly, thereby "solving the problem". The defenders of Srebrenica, Arria contends, were a problem for the international community. It turned out that the UN-protected enclave was in fact a "scene set for genocide", Arria said, adding that today he was "sorry [he] proposed the establishment of the protected area together with the other representatives of the non-aligned countries in the Security Council".

Through Diego Arria's testimony, the defense is trying to prove that Muslims in Srebrenica were under constant attacks by the Serb forces, and that resistance was not offered by organized military units under the command of the accused Oric, but self-organized civilians forced to do so by hunger and despair.

Ambassador Arria will continue his testimony tomorrow, when he will be cross-examined by the prosecutor.