HARSHER SENTENCE OR ACQUITTAL FOR ORIC

At the appellate hearing today in the Naser Oric case, the defense argued he should be acquitted. Oric was sentenced to two years in prison for crimes against Serb prisoners in Srebrenica in 1992 and 1993. According to the prosecution, Oric should receive a harsher sentence 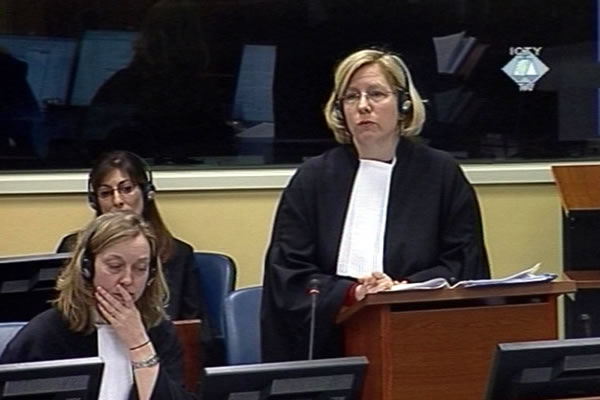 Christine Dhal, prosecutor in the Oric trial
In June 2006, Naser Oric was sentenced to two years in prison. The prosecution considers this sentence ‘too mild’ in view of the grave nature of crimes for which the former BH Army commander in Srebrenica was convicted. The defense calls for the acquittal of the accused of all charges; in its view, Oric was convicted on the basis of ‘insufficient or unsustainable evidence’.

Oric spent fifteen months longer than his sentence in detention and was released immediately after the judgment was delivered. Today he didn’t appear before the court; he availed himself of the ‘right not to attend the appellate hearing’, as confirmed by his counsel Vasvija Vidovic.

The Trial Chamber found Oric guilty of failure to prevent murder and cruel treatment of Serb prisoners in Srebrenica from 2 December 1992 to 20 March 1993. The judges concluded that after that date Oric no longer had effective control over the military police and thus wasn’t responsible for the crimes committed by its troops.

The prosecution believes this is not a proper conclusion, pointing to the evidence called in the course of the trial, which showed that Oric should have known about the beatings of Serbian captives and other cruel treatment prior to 27 December 1992. As prosecutor Christine Dahl put it, ‘he didn’t care about that despite the risk of abuse for the captured Serbs’. She illustrated her argument with a recording of a beaten prisoner that Oric was able to see in November 1992.

[IMAGE]3319[/IMAGE]‘The risk of abuse’, as the prosecution put it, originated from the situation in Srebrenica. The Serb troops were attacking the enclave that was under siege and not allowing humanitarian convoys with food and medicine to pass. After that, ‘it had to be clear to everybody that Serb captives could be exposed to abuse’, Michelle Jarvis emphasized today for the prosecution.

The Trial Chamber erred when it took the ‘horrendous circumstances’ in Srebrenica as mitigating circumstance for Oric, giving them ‘too much weight’, the prosecution contends. According to prosecutor Jarvis, the international criminal law took a dangerous turn when the crimes committed by one party in the conflict were justified by ‘the proper position held by that party and the fact that it fought for a just cause’.

[IMAGE]3317[/IMAGE]Oric’s defense counsel John Jones supported the conclusion of the Trial Chamber on mitigating circumstances. However, in his belief, the Trial Chamber erred when it found that Oric had effective control over the military police. There is no evidence that the military police ever existed in Srebrenica at all. Oric’s involvement with the alleged perpetrators of the crime in the Srebrenica police station can be described by the old British saying, 'I've danced with a man, who's danced with a girl, who's danced with the Prince of Wales', Jones said.

Errors in the judgment, according to the defense, were the result of the judges relying on the interview Oric gave to the OTP investigators in 2002. In their view, this interview didn’t give an accurate picture of Oric’s position and his role in the events he was charged with. Oric’s interview was compromised by many mistakes in translation as well as by the fact that the investigators ‘confused’ Oric because they conducted the interview in an inappropriate manner.

The appellate hearing continues tomorrow when the parties will rebut the arguments and answer judges’ questions.