Testimony of Enver Hogic who, as the head of the legal department of the BH Army 2nd Corps that Naser Oric’s troops were part of, advised commanding officers on the application and respect of the international laws of war. Did Hogic’s advice ever reach Srebrenica? 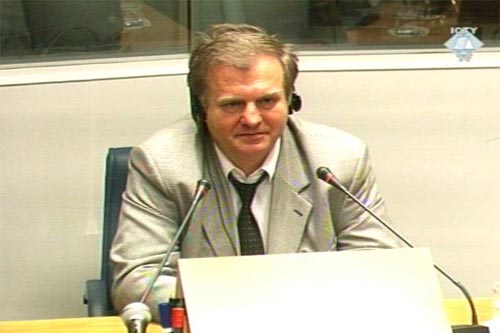 Enver Hogic, witness in the Oric trial
The BH Army units started receiving their instructions for the treatment of the prisoners of war and conduct in war operations back in May 1992, said Enver Hogich, who was the head of the legal department of the 2nd Corps between 1992 and 1996. At the trial of former commander of the BH Army in Srebrenica Naser Oric, Hogic testified on the competence of military and civilian courts in Bosnia and Herzegovina during the war.

In the period covered by the indictment – between May 1992 and March 1993 – a military rulebook existed with clearly formulated guidelines governing the army conduct during war operations, Hogic confirmed. He said that it included the provisions of the Geneva Conventions. Oric and other BH Army officers, according to Hogic, were obliged to ensure and supervise the respect of those rules and report the cases of their violations to their superior officers.

Within the command of the 2nd Corps, which incorporated the units commanded by Naser Oric, Hogic advised the officers on the application and respect of the international laws of war. He stressed that the advice he provided would be sent to all BH Army units, but was unable to confirm whether it ever reached Oric’s units in Srebrenica because of difficulties in communicating with the enclave “up to mid-1994”.

Prosecutor Patricia Sellers showed video tapes in which Oric, while talking to the Tribunal investigators in May 2001, explained that despite being a commander he could not control civilians in Srebrenica, that he believed his frontline duties were of uppermost importance and that, as a commander, he would often sign documents he had not even read. In a TV interview, whose excerpt was also shown in the courtroom, Oric said that his units had “fought using all the available means, both respecting and breaching the Geneva Conventions”.

“The Geneva Conventions had to be respected in full and it was the position of the command that had not changed since the war began”, Hogic said, commenting on that particular statement of the accused.

During the cross-examination the defense tried to prove that the units under Oric’s command had no firm structure, and that due to communication breakdowns the officers had no access to any rules of conduct in armed conflicts. Hogic confirmed that he “has no knowledge” of whether his advice on the respect of the international laws of war ever reached Srebrenica.