PROSECUTOR GIVES UP ON "NON-COOPERATIVE WITNESS"

Former president of the Srebrenica municipality was supposed to testify at the trial of Naser Oric this week but after the prosecutors realized in the course of two days of proofing that Ibran Mustafic did not want to cooperate with them, they decided not to call that witness 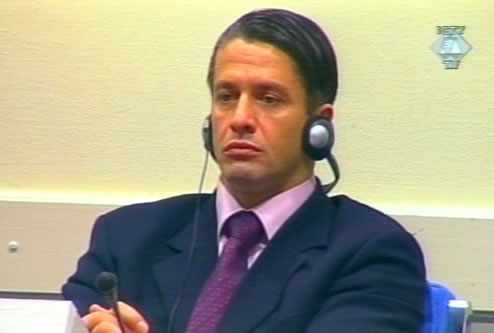 Naser Oric during the trial
The lead prosecution counsel at the Naser Oric trial today decided not to call the witness who was supposed to testify this week. In the course of two days of proofing, as prosecutor Jan Wubben said at the beginning of the morning session, the witness was "highly uncooperative" and the prosecution was forced to decide not to call him to the witness stand. The prosecution, Wubben added, was "disappointed, because we considered him an important insider". In two interviews with the OTP investigators, last August, it turned out that he had important information about the events in Srebrenica in the period relevant for the indictment against Naser Oric.

The name of the prosecution witness who will not testify was not mentioned today during the 20-minute morning session, but SENSE has learned that he is Ibran Mustafic, former president of the Srebrenica municipality and one of the founding members of the SDA party in that part of Bosnia.

Judge Agius reminded the court that the prosecution could have applied to the Chamber to declare the uncooperative witness "a hostile witness", which would make it possible for the prosecutor to cross-examine him and confront him with the statements he made in previous interviews with OTP investigators. The prosecutor decided against this option, obviously judging that he would not be able to get the information to corroborate his allegations. Oric's defense did not have anything to say to the prosecutor decision to forego the testimony, and Judge Agius said, "it never occurred to the Chamber to call this person as a court witness and to issue a subpoena for his testimony."

The prosecutors have had trouble with several unwilling prosecution witnesses – associates or acquaintances of Naser Oric from the period covered by the indictment – who evaded giving a direct answer to the prosecutors' questions, but were all too happy to confirm the main arguments of the defense about the situation in Srebrenica in late 1992 and early 1993.

Since Mustafic's testimony was supposed to last until the end of the week, the prosecution did not have a back-up witness for today. The trial was adjourned. It will continue when the prosecution manages to bring a new witness to The Hague.