"In eight months, the prosecution has failed to prove any of the counts of the indictment", claims defense counsel John Jones. He is asking the prosecution to drop the entire case. In that case, the defense would not have to present its case at all 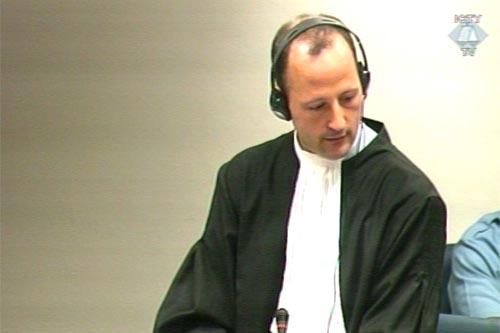 John Jones, defense attorney for Naser Oric
Defense counsel John Jones today argued that Naser Oric should be acquitted on all counts of the indictment. He said, "In eight months, the prosecution has failed to prove any of the counts of the indictment". Jones wants the prosecution to drop the entire case, "because the trial does not deserve to go on for even another second ".

The prosecution rested its case this week and the defense is seeking Oric's acquittal before the defense case begins.

Defense counsel Jones notes that in the context of Srebrenica it is hard to speak about any crimes committed by the BH armed forces, adding that the crimes Oric has been charged with were committed by hungry civilians whose very lives were at stake. Faced with the Serb aggression, they had to choose between two evils: "to die of hunger or to get killed as they went looking for food in Serb villages". No one could control the starving civilians or prevent them from doing that. The accused Oric is no exception, Jones says. He adds that stealing food and ammunition should not be considered a war crime.

The defense considers that Oric's command responsibility in any of the incidents described in the indictment has not been proven. Jones quotes, among other things, the prosecution military expert, Pyers Tucker, who testified that the BH Army in Srebrenica did not have a military chain of command or any command structure. It was made up of poorly armed volunteers who stayed in their own homes. It was difficult for Oric to exercise command over them.

There were also groups of soldiers who were commanded by local leaders (Zulfo Tursunovic, Akif Ustic and others). Oric had no influence over them, the defense contends.

The counts of the indictment charging Oric with abuse and murder of civilians in the Srebrenica police station describe “horrific events”, Jones says, expressing his sympathy for the victims and their families. However, the lawyer claims that those crimes were the responsibility of the civilian police and that Oric, who spent most of his time on the frontline, had no influence over them either.

"The prosecutor's arguments are based on assumptions," Jones says. In his view, neither the crimes, nor Oric's knowledge of them, nor his position as a superior to the perpetrators have been proven beyond reasonable doubt.

The prosecution will respond to the defense motion of no case to answer tomorrow. At the beginning of the hearing today, the prosecutor merely noted that he "agree[s] there is not enough evidence to prove Oric's command responsibility for the destruction of the hamlet of Bozici."

Judge Carmel Agius announced that the Chamber would render its oral decision on the defense motion to acquit Oric on Wednesday.