BRANDY AND CIGARS FOR GENERAL MORILLON

"In Srebrenica, the law of the jungle rules”, British colonel Pyers William Tucker wrote in his notebook in March 1993 during his stay in Srebrenica. The witness described the humanitarian airdrops and distribution as “the fight for survival.” 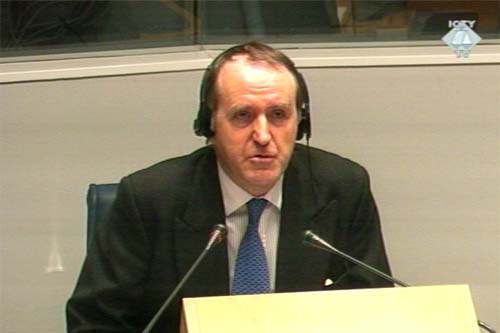 The witness described the humanitarian air drops, underway at the time, and their distribution as “the fight for survival” – “only the fittest would get it.” Tucker recounted how about four people would be killed every night in the fights about the food dropped from the helicopters.

Most of the people in Srebrenica, the witness said, ate flour they obtained from hazelnut trees that “tasted like sawdust.” At that time, about 70,000 people lived in the Srebrenica pocket, according to the UNHCR data.

One night, among the pallets of food that were airdropped there was a package with cigarillos and brandy for General Morillon. However, the package had already been opened when it reached the general and cigarettes and brandy were gone.

Colonel Tucker’s notebook also contains entries indicating that Morillon was aware at that time already that “crimes against humanity” would be committed if Serbs were to take Srebrenica. As he planned the establishment of a demilitarized zone, Morillon knew, according to the witness, that four to six thousand UN troops would be needed to defend the zone, but that he did not have those assets either then or later. Tucker said that, in that light, he was able to understand why Oric did not want to hear about the demilitarization of Srebrenica.

As Morillon negotiated about the humanitarian aid deliveries, evacuation of the wounded and the deployment of UN observers, he contacted the Serb commanders several times. They were “terribly angry” that the UN observers were in the area. He mostly met with Milan Gvero, although the Serbs, as Tucker said, kept promising that Ratko Mladic would come.

When Mladic was mentioned and when the witness was asked whether he was aware that Mladic was indicted for the genocide in Srebrenica, Tucker said curtly, “I hope he burns in hell!” Speaking about two other VRS officers who have also been indicted for the Srebrenica crimes, the witness noted, “Tolimir was a Rottweiler and Gvero a lapdog that Serbs trotted out when necessary.”

Naser Oric, former BH Army commander in Srebrenica, is charged in six counts of the indictment with the plunder and burning of Serb villages in Eastern Bosnia and maltreatment, beating and murder of Serb detainees in the Srebrenica police station.