WHY BURN A HOUSE THAT HAS BEEN LOOTED?

After explaining first that the Muslim refugees living in Srebrenica enclave burned houses in Serb villages “because they were afraid they would be moved there”, Dr. Nedret Mujkanovic later agreed to the suggestion put forward by the presiding judge that they in fact did that “for the same reason Serbs did it” – to prevent the owners from returning to their homes 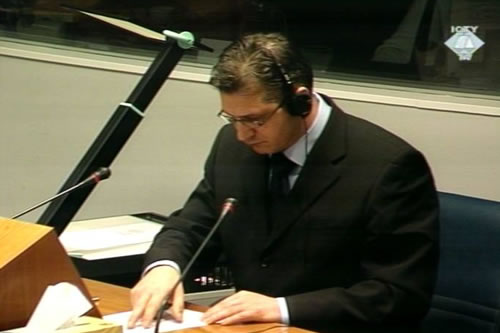 Nedret Mujkanovic, witness in the Oric case
Serb villages in the Srebrenica area were plundered and burned in 1992 and 1993 by civilians desperate to find food, claimed Dr. Nedret Mujkanovic in the course of his marathon testimony at the trial of Naser Oric. Mujkanovic is a doctor from Tuzla who was a surgeon in the war hospital in Srebrenica during the war.

The prosecution is charging Oric, former commander of the BH Army units in Srebrenice area, with “wanton destruction” of the villages in that region. Although Mujkanovic was called as a prosecution witness, he claims that the BH Army “did not burn houses” and that he saw with his own eyes civilians do it – women, children and the old people. “When they got whatever could be taken away, they burned the house”, Mujkanovic described the actions of the civilians.

The failure of the prosecution to ask the witness why the houses were burned after they had been looted, and the evasion of the issue by the defense – was corrected by presiding judge Carmel Agius as Mujkanovic’s testimony drew to a close. “I can understand why the houses were looted, as those people were hungry, but why did they burn the houses?” the judge asked.

The witness first came up with a rather original explanation. According to him, the houses were burned because “the refugees from occupied Muslim villages who had taken shelter in the Srebrenica enclave were afraid they would be relocated there”. Mujkanovic thinks that the refugees were afraid they would be moved to Serb villages from the Srebrenica enclave. The villages were 20 or 30 kilometers away from Srebrenica, close to the frontlines. That is why they burned houses in order to make them uninhabitable.

Having heard the explanation, the judge asked Mujkanovic whether “Serbs burned houses too?” The witness confirmed that and added that “their motive was probably to prevent the Muslims from returning to their homes.” The Maltese judge then put it to the witness that “Muslims, civilians and soldiers alike, did that with the same motive: to prevent Serbs from returning to their homes.”

Mujkanovic agreed that this might have been a reason why Muslim civilians burned houses in Serb villages in Srebrenica in 1992 and 1993. He explained this may have something to do with the mentality of “the man from the Balkans, who has close ties with the physical space, the house.” According to him, it is “one people divided by three religions, but sharing the same mindset and mentality.”