NIGHTLY VISITS TO “CHETNIKS” IN THE SREBRENICA PRISON

At the trial of Naser Oric, witness from the village of Cosici describes abuse he was subjected to as a detainee in January 1993 in the SUP building and at other locations in Srebrenica 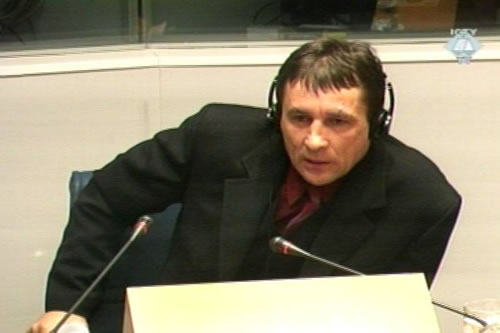 Ilija Ivanovic, witness in the Oric trial
The trial of Naser Oric, former BH Army commander in the Srebrenica region, continued today with the testimony of Ilija Ivanovic from the village of Cosici near Srebrenica. He was captured on 16 January 1993 after an attack on his village.

Ivanovic confirmed that he was a member of the village guard made up of the villagers from Cosici. They were armed with “semiautomatic and automatic rifles”. Twelve of them were killed in an attack launched by the “Muslim forces” on 16 January, Ivanovic described. He himself was captured as he retreated.

Ivanovic claims to have seen not only the attackers he described as armed men in camouflage uniforms and civilian clothes, but also women and even children who followed the soldiers “creating a great din” and dragging horses they used to carry “everything they would confiscate.”

Ivanovic was taken to the Srebrenica SUP building where he spent three or four days and was then taken to the “national defense building.” On sketches made according to his instructions, the witness indicated the cell where he was detained with three other Serbs. It was a “small room with a concrete floor, a single window and a radiator, but with no heating.”

The detainees were beaten on a daily basis, Ivanovic said, specifying that they would be “beaten in particular during the night”, when “visitors, including girls sometimes,” would come to the building.

“First we would hear the sound of a truck coming, then shouts of “let’s see the Chetniks,” and then the visitors would get into the building and start beating us”, Ivanovic described. He had two ribs, nose and a cheekbone broken as the result of the beatings. His face and body bear numerous scars from the punches and cuts.

The witness described that on one occasion, when he was beaten in front of the reception booth and received the most serious injuries, among the soldiers and visitors stood a man “with black hair and beard” in a camouflage uniform. The other soldiers pointed this man out to him as “our champion, the chief, the boss, or our Naser.” Ivanovic was unable to confirm that was indeed Naser Oric since he “did not know him” at the time, as he said.

When Judge Agius insisted that he clarify whether he thought today that this was the accused, the witness said that when he saw Oric in photographs and video tapes later, he thought it was the same person that was at the reception of the National Defense building the day he received the severest beating.

The last five or six days of his captivity, Ilija Ivanovic spent in hospital together with three other detainees. They were locked up, but “no one beat” them, the witness said. He confirmed that this was the first time they received any medical treatment. They were eventually exchanged.

Ivanovic and a group of other detainees were taken to be exchanged three times. When they returned from “failed negotiations”, the Muslim soldiers would tell them: “Even the Chetniks don’t want you.”

Ilija Ivanovic’s testimony will continue with the cross-examination by Naser Oric’s defense.