According to British expert Andrew Gow, and by extension, the prosecutor who has called him to testify, the conflict in BH broke out when the Serb side set out to draw new borders through ethnic cleansing. Gow testified about the development of the conflict in which the crimes that Naser Oric is charged with were committed 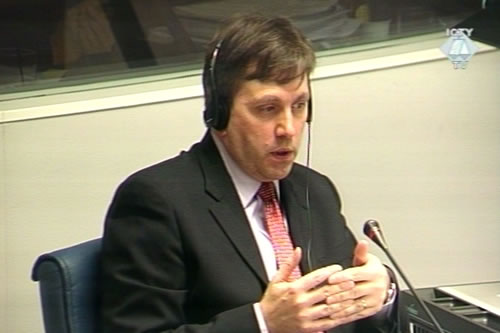 Andrew Gow, witness in the Oric case
British Professor Andrew Gow, expert for war and security issues, testified at the trial of Naser Oric about the development of the conflict in BH. In the context of that conflict the forces under Oric’s command, as alleged in the indictment, carried out the attacks on Serb villages and civilians in the Srebrenica area.

According to Gow, and by extension, the prosecutor who has called him to testify, the conflict in BH broke out because of the attempts by the Serb side – SDS party in BH supported by the Belgrade authorities - to draw new borders through ethnic cleansing. In an attempt to avoid the ascribing of blame to Belgrade, the JNA was transformed in May 1992 – a month and a half after the start of the war in BH – into the Yugoslav Army and the Republika Srpska Army, the witness said. He added, however, that regardless of the formal transformation of the military, the implementation of the “Serbian project” continued with the aim of joining all the “Serb” territories in Croatia, BH and FR Yugoslavia together.

Faced with a situation in which the Serb population in BH “looked towards” Serbia and the Croat towards Croatia, “Bosniaks considered the declaration of independence to be the best way to protect the BH State,” Gow added. In the beginning there was no army of Bosnia and Herzegovina, Gow notes, and the Sarajevo Government used the old defense structure – the Territorial Defense – to defend the state, until it established the BH Army in late 1992.

In the course of the cross-examination, Naser Oric’s defense did not challenge his testimony, but tried to expand them by including additional information and documents. The defense suggested that one of the strategic goals of the Bosnian Serb Assembly was to remove the border on the Drina River and to join the Bosnian side of the Drina basin with Serbia. The witness agreed that the plan was to annex parts of BH. The defense is trying to prove that Oric, as the commander of BH Army forces in the Srebrenica area, operated in a very difficult situation, with the Bosniak population expelled from their villages and besieged, and that the attacks on Serb villages were conducted in order to obtain food.