Although Naser Oric isn’t charged with the deaths of those killed during attacks by his forces, the prosecution claims the victims were civilians, while the defense is trying to prove that the majority of the casualties were fighters from the VRS Bratunac Brigade killed in action. 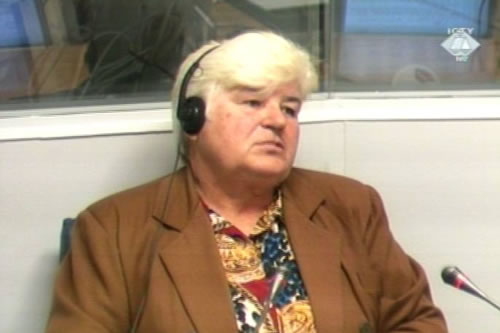 Novka Bozic, witness in the Oric trial
When the Serb village of Radijevici near Bratunac was attacked on 5 October 1992, many of its inhabitants were "in the fields, doing fall farm work," testified Novka Bozic at Naser Oric’s trial today. She lived in Radijevici with her husband and four children; she was a housewife.

The witness described how the "shooting started around noon," and that apart from "the gunfire from a nearby woods," she also heard shouts of, "Get them, get the Chetniks, get them alive!" As she fled with the others "towards the Drina River," she saw "soldiers in uniforms" but could not recognize any of them. The village of Radijevici is next to the river, surrounded by two other Serb villages--Diovici and Boljevici. The nearest Muslim village, Zanjevo, is about three kilometers way from Radijevici.

Most of the villagers who gathered there "crossed the river Drina and went into Serbia." Those who could not get into the boats because there was no room left "held hands and walked into the river," the witness described. When they returned to the village two days later, they saw that four of the 22 houses had been burned, while the others showed signs of being fired upon. The cattle had been taken away, Novka Bozic said, adding that no one in the village "had prepared for the attack because no one had expected it." Among those killed, she identified her mother and several neighbors whose names she gave during her testimony.

The indictment alleges that Naser Oric commanded the attack on the villages of Radijevici, Fakovici and Diovici on 5 October 1992, leading members of the Territorial Defense units from Potocari, Osmaci, Suceska and Skenderovici and the Stari Grad company. He is charged with the "plunder of property and cattle of Bosnian Serbs and for the unlawful destruction of property and houses.

Oric's defense counsel John Jones objected to the prosecutor's request that the witness describe the bodies of the villagers who were killed that she was able to recognize, noting that Naser Oric "is not accused of the killing of those people." Presiding Judge Agius overruled the defense objection; the witness then stated that evidence of violence could be seen on the dead bodies and that "none of them had worn a uniform."

Showing the witness a "list of the VRS Bratunac Brigade fighters killed between 1992 and 1996," the defense put it to the witness during cross-examination that the majority of the casualties were in fact VRS soldiers who had been killed in action. The witness denied it, stating, when asked by a judge, that "both the elderly and the young men from the village had fled to the Drina River together with all the rest."