A witness from Bjelovac, whose children were taken prisoner by the Bosniak soldiers says, “I told Oric once, ‘What kind of a commander are you, you’ve captured a six-month old baby!’ And he said that all those who found themselves on the frontline were fighters as far as he was concerned.” 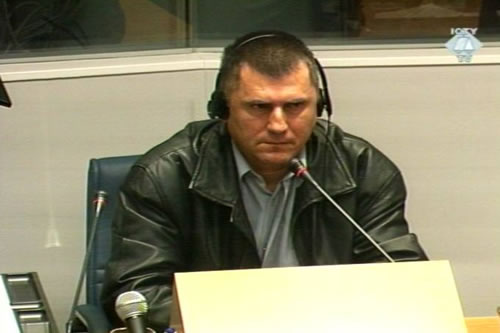 Slavoljub Filipovic, witness in the Oric trial
Naser Oric personally communicated with ham radio operators on the Serb side to tell them he had Serb captives to be exchanged, witness Slavoljub Filipovic from Bjelovac testified. As a prosecution witness at the trial of Oric, former BH Army commander in the Srebrenica area, Filipovic testified about a Bosniak attack on his village of Bjelovac on 14 December 1992, in which many of his neighbors died, as did two of his relatives. Some of the civilians were taken prisoner.

The witness, who defended the village together with the other members of the village guard, listed the names of the people who were killed or were set on fire in the attack mounted by Oric’s forces. In the days that followed the attack, Filipovic saw his own father and brother among the dead bodies. “My six-month old son and my three-year old daughter remained in the house. I thought they had burned, but a woman told me that they had jumped into the Drina river,” Filipovic recounted. “About seven or eight days later I learned that they were in Srebrenica as prisoners.”

Filipovic, who had known the accused Oric from before the war, said that he had been listening in on the conversations between ham radio operators: his friends on the one side and Oric on the other. “Once I told Oric, ‘What kind of a commander are you, you’ve captured a six-month old baby!’ And he said that all those who found themselves on the frontline were fighters as far as he was concerned.”

When the judges asked him if he had used his acquaintance with Oric to tell him that the children were his, Filipovic said he had not. He let the “authorities and the military sort out the case among themselves”. Filipovic’s wife and children were exchanged on 16 February 1993 in Skelani.

The witness will continue his testimony with the cross-examination by the defense.