According to Naser Oric’s defense, the motive behind the attacks on Serb villages in the Bratunac and Srebrenica areas in June 1992 was "desperate civilians' hunger." Stanisa Stevanovic testifies about those attacks today. 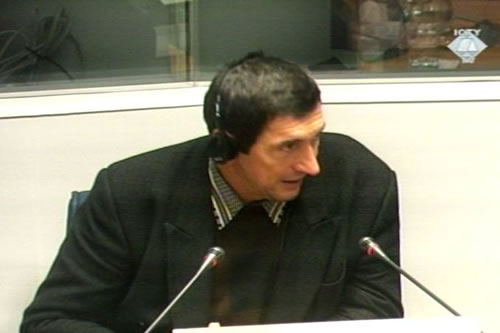 Stanisa Stevanovic, witness in the Oric case
The population of the Serb villages and hamlets around Bratunac and Srebrenica organized village guards in the first half of 1992, testified Stanisa Stevanovic at the trial of Naser Oric. Stevanovic is from the village of Bradjevina near Ratkovici.

“Until June 1992, when Bradjevina was attacked, quite a few Serb villages in the Srebrenica [area] had already been burned," Stevanovic said, describing how news of the murders and burned houses in this area quickly spread to other villages. In May 1992, the witness took his seven children to his relatives in the village of Vranjesevic, which was "closer to the Drina River."

Stevanovic explained that the village guards were made up of villagers, and that in his village, Bradjevina, the guards counted "12 men"--the total number that lived in the 12 village households. They bought weapons themselves. "The weapons one had depended on how much money one had," Stevanovic said. The witness said that he’d heard weapons were traded in "a café owned by a man named Slavko Jovanovic in Fakovici," the chairman of the village SDS.

Stevanovic said the village guards "did not wear any uniforms. They did not have any links with the JNA or the RS Army." The witness claims only one meeting was held in February 1992 in the village of Ruljevici. Representatives attended it from every village and hamlet.

Stevanovic's village, Bradjevina, was attacked on 21 and 27 June 1992. The witness recounted how after the first attack, the villagers "took their cattle down to Grabovicko Polje by the banks of the Drina River," but some of the cattle "were stolen by the local Serbs." They brought the remaining cattle to the village on 26 June, believing they would not be attacked again.

But the next day, Bradjevina was attacked again. The witness sought shelter in a fallow field. After the morning fog lifted, he could see "the nearby villages of Gornji Ratkovici and Dvorista burning." He claims to have seen groups of "civilians and soldiers retreating across the fields towards the village of Mocici, driving the cattle before them." The witness claims they burned the buildings in the field as they passed.

Ratkovici and the surrounding villages were destroyed completely; Bradjevina was among them. "The farmers sustained 100 percent damage," the witness said, describing how "everything was burned down." Household appliances, TV sets and other valuables were first plundered from the houses and the cattle driven out or killed in the stables.

Stevanovic was an eye-witness to the murder of a man whose body was photographed. Because of the brutality of the pictures of the massacred body, judges decided that the witness should testify about that event in closed session. When public session resumed, the only thing heard was that Stevanovic took the body of his dead neighbor to the bank of the Drina River, where his son then took it and buried his father in Bajina Basta.

Stevanovic said he can go to his village of Bradjevina today only "as a tourist - to see it," but not to live there. "Everything has been destroyed and burned down." No one lives in those parts today, he said. "Everything is overgrown with weeds."

In an attempt to challenge allegations in Stevanovic's testimony that Bosnian Serbs were attacked, Naser Oric's defense suggested that the "soldiers and civilians" the witness "allegedly saw burning and looting" had in fact been "desperate civilians, women and children forced to bang pots and pans in order to scare their enemies, risking their lives to get food." Oric is charged with the wanton destruction of towns and villages and the plunder of Bosnian Serbs’ property in the municipalities of Srebrenica and Bratunac in 1992 and 1993.

The witness, however, maintained that they were "men who went there in order to burn and plunder Serb villages." He said, "Gentlemen, I do not know whether they were forced to do that, but they did attack us.”