NO SHOW-DOWN BETWEEN KRAJISNIK AND PLAVSIC

The Trial Chamber first allowed the accused Krajisnik to question Biljana Plavsic, then prevented him from doing so, because even before his examination started he kept on saying he disagreed with the witness, thus violating the proper procedure. The witness was also cut short a few sentences into her address to the Chamber, although at first she had been allowed to address the judges “on an issue completely unrelated to the trial” 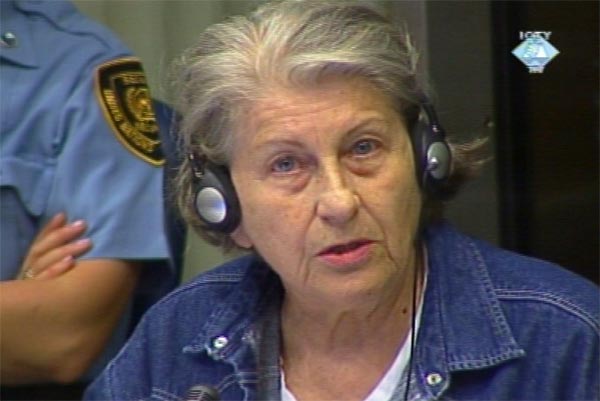 Biljana Plavsic in the courtroom
Although Momcilo Krajisnik said today that he had not seen Plavsic in ages, he managed merely to greet her and say a few sentences to the witness, his erstwhile colleague in the Pale leadership who was charged with the same crimes as he is. He had first been allowed to ask questions, but before his examination actually started, the permission was withdrawn, because he had kept on expressing in various ways his disagreement with the claims made by Biljana Plavsic. The presiding judge warned him several times that this was in violation of the proper procedure.

Before Krajisnik, the witness was questioned by the prosecutors and the defense counsel. Since her book, My Testimony, in which she said a lot about the wartime role of Momcilo Krajisnik, has already been admitted into evidence, the prosecution took just half an hour to examine her. In that period, she said that she had learned 80 percent of what had actually happened during the war only after her arrival in The Hague, when she had read the reports and orders of the Bosnian Serb civilian and military authorities.

She explained that she had objections about the authenticity of some documents she had been shown in The Hague. Among other things, as she explained, some reports indicate that the sessions of the Bosnian Serb Presidency started at 8 or 9 a.m. This was impossible, she explained, because it was a well-known fact that President Karadzic “liked to sleep in”.

Momcilo Krajisnik’s defense took much longer to examine her. The focus was on the parts of her book, My Testimony, that have virtually nothing to do with the indictment, but were mentioned by the accused Krajisnik when he sought to be assigned counsel to sue Biljana Plavsic last year. The defense counsel primarily challenged the claims made in the book to the effect that Krajisnik was a man with a criminal record and that during the war he had kept in his home arms that were to be sold to the enemy, the Muslim army.

Plavsic admitted that in 1992 she hadn’t visited Krajisnik’s house and that she hadn’t seen with her own eyes the weapons cache and his arms-smuggling activities. She said she had obtained the information from “at least five sources”. As for his pre-war criminal record, she said she knew he had spent 12 months in jail in 1987. That was where he had met Radovan Karadzic. The two Bosnian Serb leaders forged their friendship in that period.

In response to the questions asked by the defense, she described her visit to Foca and Zvornik. She went there in late April 1992 together with Princess Linda Karadjordjevic, when she and her husband Tomislav heard reports in the foreign media about the Serb crimes. The only thing the Bosnian Serb vice-president and the Serb princess were able to ascertain was that there was a shortage of antibiotics in the Foca hospital and that Muslims were fleeing from Zvornik to Serbia in fear. The indictment against Krajisnik alleges that several mass murders of Muslim civilians were committed in Foca and Zvornik in 1992, a few of them in April. The indictment goes on to state that a total of 50 detention facilities operated in the two municipalities. Non-Serbs were killed and tortured there.

At the end of her testimony, Biljana Plavsic asked for five minutes to address the Trial Chamber “on an issue unrelated to the trial”. She was allowed to do so, but when she complained that she was serving her 11-year sentence “together with prostitutes and drug addicts” in a Swedish prison, the presiding judge cut her short and instructed her lawyer, who was present in the courtroom, to find a way to raise this issue with the ICTY and assist his client.

Thus Biljana Plavsic’s testimony ended on her 76th birthday. At the end, she told the presiding judge he had no reason to thank her, because she had not come voluntarily, but because she had been issued a subpoena. The same kind of court order was issued to compel the wartime prime minister in the Bosnian Serb government Branko Djeric to testify. His testimony will begin on Tuesday.