After the Detention Unit doctor stated that Biljana Plavsic’s blood pressure “is high, but not critical”, the Trial Chamber decided her testimony could begin. At the beginning of her testimony, she described the accused Krajisnik as one of the two most influential persons among the Bosnian Serbs. As she said, the deputies and the municipal government representatives knew that and that is why they all swarmed in front of Krajisnik’s office 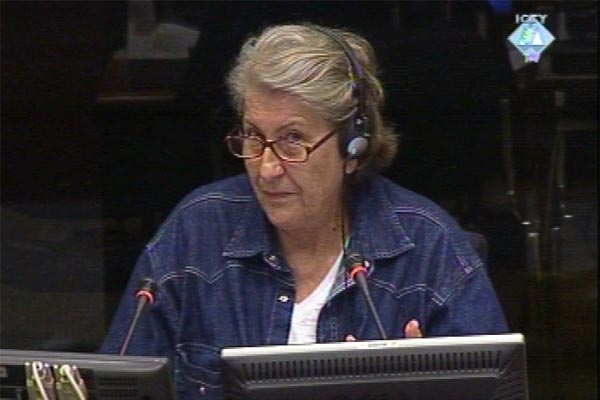 Biljana Plavsic testifying in the Krajisnik trial
Momcilo Krajisnik and Radovan Karadzic were the two most influential persons in the Bosnian Serb leadership, Biljana Plavsic said today, testifying at the Momcilo Krajisnik’s trial. She took the stand following a subpoena issued to her by the Trial Chamber. In some matters, the wartime vice-president of Republika Srpska added, the accused Krajisnik even “had a dominant role in relation to the president of the republic”.

She confirmed what she wrote in her book My Testimony about all the leaders “who were not either Radovan's or Momo's men had to go” – in 1992, they were all either removed from office or forced to resign. Thus, she says, in November 1992, Prime Minister Branko Djeric resigned after the pressure and vilification by men loyal to Karadzic and Krajisnik. She was present when cabinet ministers Momcilo Mandic and Mico Stanisic said to Djeric, “You’re not our boss, we don’t report to you, but to Karadzic and Krajisnik”. The pressure he was under, Djeric will probably describe next week, since he is the only remaining Trial Chamber witness at the Momcilo Krajisnik trial.

When neither Krajisnik nor Karadzic were at Pale, the Presidency did not meet because no major decision in the state could be taken without them. They alone, she says, decided what to accept and what to reject at the peace talks in 1992. They did not consult either her or other leaders. When the presiding judge asked who they had consulted, Plavsic simply said: Slobodan Milosevic.

In its case, the defense claimed that the accused had not had any information about the developments on the ground and that he had been informed about the situation in various municipalities only sporadically by people he had known well personally. Plavsic painted a completely different picture: she said that “there was always a lot of people” in front of Krajisnik’s office, waiting to meet him. Assembly deputies were regulars, as were the representatives of the local authorities from the entire Republika Srpska.

Apart from showing that the accused could have been very well informed about the war developments in every part of BH under Serb control, she highlighted once again the power he had wielded. She claims that his influence soon “became common knowledge” and that people would say, “Go and see Momo, he’ll fix it for you”.

In her testimony, Plavsic mostly spoke about herself and her isolation from the rest of the SDS leadership, touching on the power wielded by the accused Krajisnik and fugitive Karadzic. She did not omit to describe her one meeting during the war with Slobodan Milosevic. In May 1993 at Jahorina, she refused to greet him, calling herself the “only opposition politician” in the Bosnian Serb government.

The session today started with the topic that concluded the session yesterday: the witness’ health. She continued to complain about her high blood pressure, saying the noise in her head was “like a waterfall”. She also said she couldn’t concentrate. After obtaining the opinion from the Detention Unit doctor – he said that Mrs. Plavsic’s blood pressure was “high but not critical”, the Chamber decided to continue with her evidence in order to conclude it by Saturday, when she is scheduled to return to the Hinseberg prison in Sweden. She is currently serving the 11 years prison sentence she received after in November 2002 she pleaded guilty to the crime of persecution.

The judges took only an hour and a half to ask their questions, but the interview Plavsic had given the court officials was admitted into evidence. Her testimony will continue and end tomorrow. The prosecutors will have one third and the defense two thirds of the session tomorrow for their examination of the witness.