Former president of Republika Srpska Biljana Plavsic should have started her testimony at the Momcilo Krajisnik trial today, but the hearing was adjourned until tomorrow because of her high blood pressure. Plavsic had been subpoenaed by the Trial Chamber. Before the adjournment, Biljana Plavsic stressed that she was “not on good terms” with the accused and that for her the testimony was “an unpleasant business” she would like to end as soon as possible 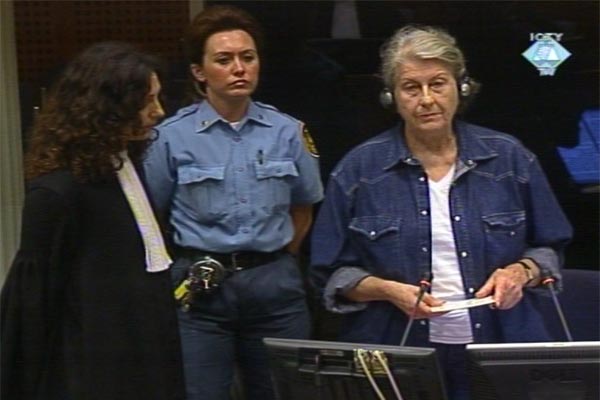 Biljana Plavsic testifying in the Krajisnik trial
After two ministers in the wartime Bosnian Serb government, the Trial Chamber called Biljana Plavsic as witness at the Momcilo Krajisnik trial. In the period relevant for the indictment, she was a member of the Bosnian Serb Presidency. Today, she is serving her sentence in Hinseberg prison in Sweden. After she pleaded guilty to the crime of persecution in November 2002, she was sentenced to 11 years in prison in February 2003.

After taking the oath, Biljana Plavsic said she was in court against her will, adding that she had agreed to come only after she had received the subpoena to come and testify. She had initially refused to testify because of her ill health, saying she had extremely high blood pressure. After the “handcuffs incident” this morning, she went on to say, her blood pressure got even higher, but she didn’t say anything more about the nature of the incident. The first part of the morning session was devoted to correcting the statement the reluctant witness had given to the court officials just before her arrival in The Hague.

After the break, Mr. O’Sullivan, counsel representing Biljana Plavsic, who had been allowed to be present during her testimony, said his client had had health problems during the break. Plavsic clarified that she had high blood pressure. As she said, “it went high when I received the subpoena in the Swedish prison and has been high ever since”.

She refused to say whether she was able to continue her testimony, saying she wanted to get the “unpleasant business” over with and that she could “go on testifying until midnight” but that she didn’t know whether she would “be alive to leave the courtroom”. The Trial Chamber then ordered another break to seek additional information from the Tribunal’s doctor who had examined Biljana Plavsic. They were to decide about the course of her testimony after that. It was stated later that the rest of the hearing today was cancelled and that the Krajisnik trial would continue tomorrow morning.

In addition to high blood pressure, Biljana Plavsic had another thing bothering her, as she informed the judges as soon as she entered court. Since, as she said, she was “not on good terms with the accused”, in her view “it would not be good” for her to speak about him in court. The presiding judge explained to her that she would be expected “to speak about the facts, not to present opinions” about what kind of a man he was.
The accused Krajisnik doesn’t have a good opinion of Plavsic either, as evidenced last November, when he asked the ICTY Registry to assign counsel to him in order to be able to sue his former associate from the Pale leadership. The reason was what she had written in her book, My Testimony, written in prison and published last year. In it, she levies a number of charges against Krajisnik.
Biljana Plavsic and Momcilo Krajisnik were charged with the same crimes, but when Plavsic pleaded guilty to persecutions on political, religious and racial grounds, the indictment against her was severed from his and genocide charges were dropped.