Momcilo Krajisnik, testifying in his own defense, spoke today about the SDS vision of the future of BH. Allegedly, the party hoped it could get an independent BH modeled after the Walloon-Flemish system, yet at the same time, it declared its entity to be art of Yugoslavia 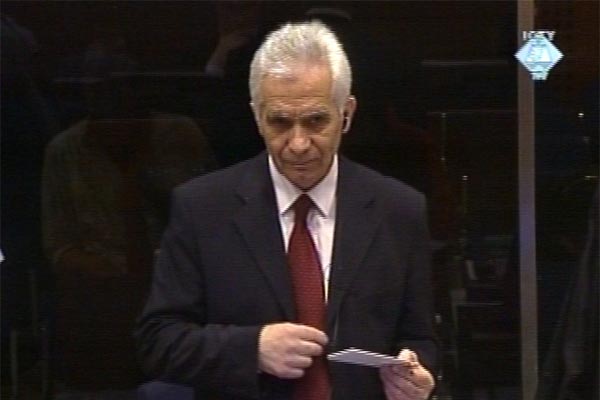 Momcilo Krajisnik testifying in his own trial
The SDS leadership did not oppose the aspirations of the SDA and HDZ to BH independence, Momcilo Krajisnik said on the seventh day of his testimony in his defense. As he explained, the only difference was that the SDS did not want to have a centralized state, but a state divided into entities, as envisaged in Cutilheiro’s plan, signed by the three parties on 18 March 1992.

He did admit that in February 1992, a month before Cutilheiro’s plan was signed, the Bosnian Serb Assembly discussed the Constitution of the Serbian Republic of BH, in which the entity was treated as part of Yugoslavia.

Krajisnik explained this illogical element by claiming that the Constitution of the Serbian Republic of BH was adopted on 27 March 1992, after Cutilheiro’s plan fell through. Krajisnik said that by drafting a Constitution that was in contravention of Cutilheiro’s plan but not adopting it, they “extended a hand to the other side”.

Krajisnik admitted that the Serbian Democratic Party was in favor of dividing the three ethnic communities, but on the Belgian and Dutch model. He had heard that in Belgium two ethnic groups lived “side by side”, that there were not only separate entities, but even the Flemish and Walloon quarters within cities. The SDS used this as an argument to advocate the division of Sarajevo.

He went on to admit that he had just heard stories about the Belgian system but that he didn’t really know whether the story about the two ethnic groups living apart was correct. He didn’t bother to check either, but he considered “this model to be acceptable for BH”. Radovan Karadzic told him, furthermore, that in the Netherlands the Catholic and Protestant children “attend separate classes and schools right from the start of their education”. They wanted to introduce that system in BH, although they were not certain whether it really did exist or not.