WHAT WERE PROSECUTION WITNESSES DOING IN SREBRENICA IN JULY 1995? 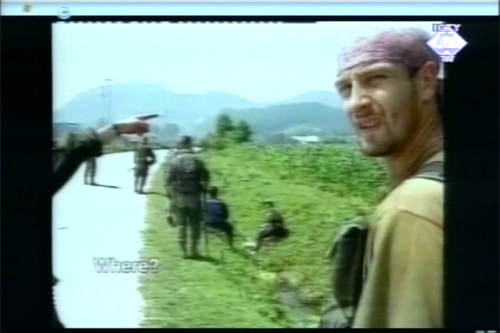 Nikola Popovic in the footage from Srebrenica
In their cross-examination, Naser Oric's defense counsel asked virtually every prosecution witness – there were 50 of them – where they had been and what they had been doing in July 1995, when about 8,000 Bosniaks were killed in Srebrenica. They all claimed they had been somewhere else, not in Srebrenica.

As the defense continued with its case today, examining protected witness D-005, Oric's defense lawyers named ten prosecution witnesses who, as the report of the Republika Srpska Government Commission, had participated in the Srebrenica operation conducted by the VRS in July 1995. The defense found their names on the list of 17,342 persons who, as the RS Commission determined, participated in various ways in the events on the eve of, during and after the fall of the Srebrenica enclave. The confidential list was disclosed to the defense by the prosecution, as part of their obligation to disclose potentially exculpatory material. In this case, this is evidence that might affect the credibility of prosecution witnesses.

During the war, witness D-005 was a member of one of the armed Muslim groups in the Konjevic Polje area, near Bratunac. When the defense showed him Reuters agency footage of Serb forces entering Potocari on 11 July 1995, the witness identified Nikola Popovic, who testified as a prosecution witness at the trial of Naser Oric. According to witness D-005, Popovic was one of the Serb soldiers who had singled out and taken away his father and several other men. They disappeared without a trace. After the war, the defense witness learned from the women who had passed through Kravica en route to Kladanj that they had seen and identified Popovic among the military police officers who had participated in the massacre of more than 1,000 Bosniaks detained in the co-op warehouse. Nikola Popovic was identified as a participant in the massacre by the former security officer in the Bratunac Brigade in his Statement of Facts and Acceptance of Responsibility.

Apart from impeaching prosecution witnesses, the defense tried to prove, through the testimony of witness D-005, that Bosnian Serb units and heavy weaponry were stationed in Kravica and other Serb villages around it, that in late 1992 and in 1993 Kravica was one of the centers from which Serbs launched attacks on Muslims in the Podrinje area, and that the villagers there participated in many crimes in the four years of war. Naser Oric has been charged with the destruction of those villages.