DESTRUCTION WAS RESULT OF "NECESSITY" 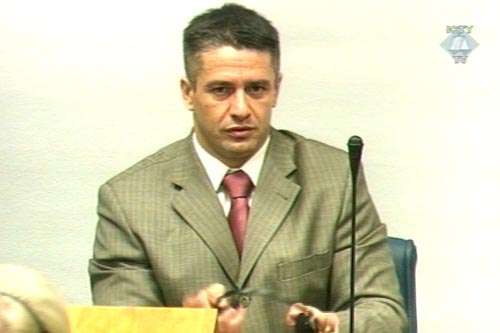 Naser Oric in the courtroom
"As early as in 1993, the Serb forces tried to implement in Podrinje the plan they finally managed to implement three years later," claims protected witness D-005, confirming the arguments put forward by Naser Oric's defense about the superiority of Serb forces in the Bratunac and Srebrenica area. Testifying about the situation in Konjevic Polje, D-005 said that in late 1992 the enclave had been surrounded by Serb forces and that attacks had been launched from the Serb villages listed in the indictment against Naser Oric, such as Kravica, Jezestica and Siljkovici.

The defense is trying to challenge the allegations in the indictment that the forces under Naser Oric's command are responsible for "the destruction of at least 50 villages not justifiable by military necessity". The argument of Oric's defense is that "the necessity existed", because the houses and other civilian structures in those villages were turned into legitimate targets by the Serb forces. "There were armed people in the houses, artillery pieces next to the houses and buildings such as schools were turned into barracks and arms depots," the witness claims.

Oric's defense counsel corroborated claims made by witness D-005 by VRS documents, quoting mostly the correspondence between the commands of the Bratunac Brigade and the Drina Corps. Among other things, the documents contain plans "to destroy the Muslim forces and evict the non-Serb population" from the Podrinje area and list names of VRS units stationed in the villages Oric is allegedly responsible for destroying.

The defense is primarily trying to prove that there was no "deliberate and unjustified destruction" in the attacks on Serb villages, but is also trying to convince the Trial Chamber that Naser Oric was not the commander of the units that destroyed the villages listed in the indictment. To confirm that argument, witness D-005 says that the armed groups from the Konjevic Polje area were never under the command of anyone from Srebrenica during the war. He indirectly contested the allegation in the indictment that Naser Oric had commanded the Joint Forces in the Srebrenica subregion, stating that the bodies of the Subregion, established in November 1992, never actually became operational.

The defense will end the examination-in-chief of witness D-005. He will then be cross-examined by the prosecution.