Testifying as Naser Oric's defense witness, former UN observer confirms defense argument about the superiority of Serb forces over powerless Muslim troops and about the crimes committed against civilians in Podrinje 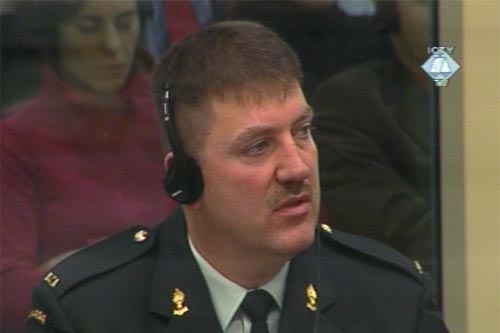 Lawrence McDonald, defense witness for Oric
Describing the observations he made during the war in Bosnia and Herzegovina, Canadian military officer David Lawrence McDonald confirmed several arguments put forward by the defense. He first spent four months in Sarajevo as a UN observer in late 1992 and early 1993, was subsequently transferred to Serbia and was able to enter Srebrenica from there on 27 March 1993.

Bosnian Serbs were very well-organized and equipped, Captain McDonald testified. They got substantial artillery and air support from Serbia, and regular deliveries of weapons and ammunition, he added. On the other hand, the poorly-armed Muslim fighters, most of whom did not wear uniforms at all, "were not a real army", according to McDonald. Confirming the defense argument about the superiority of Serb forces over powerless Muslim troops, he compared the situation around Srebrenica with a boxing match "between Mike Tyson and a fifteen-year-old boy fighting with his hands tied".

The witness also corroborated the defense allegations about the crimes committed against Muslim civilians in 1992 and 1993. He claims to have seen Serb bunkers around Srebrenica that were used, according to other UN observers, to target the civilians trying to break through from the Srebrenica region towards Tuzla. The witness claims he personally saw the Serb forces plunder and destroy villages around Srebrenica.

Talking about the attempts by the then UNPROFOR commander to enter Srebrenica in early March 1993 with a group of UN soldiers, McDonald described how Serbs had been trying to block that for two weeks, claiming that "Morillon is in danger from strong Muslim forces". He said that his team leader, Russian military officer Alex Vasilyev, had witnessed the shelling of Muslim civilians gathered around a UN vehicle in Konjevic Polje on 12 March 1993. As he said, "hundreds of women and children were killed there".

General Morillon and his escort managed to enter Srebrenica on 27 March 1993. The Canadian captain arrived almost immediately after them, with a group of UN observers. As he described it today, Srebrenica was "full of people, the situation was one of chaos, and the actual situation in the town was beyond anyone's control". This is the argument offered by Oric's defense: they are trying to prove that in such a situation there could not have been a unified command and control over the Muslim groups. One week after entering the enclave, the witness was wounded by a shell fired from the Serb territory and was evacuated immediately.

The Canadian captain will be cross-examined by the prosecutor tomorrow.