MAKE-SHIFT ARMY WITHOUT A COMMANDER

During Mustafa Sacirovic's examination-in-chief, Naser Oric's defense recapitulated most of its main arguments. From the beginning of their case, the defense has been trying to prove that in 1992 and 1993 the Serb forces controlled the situation in the Podrinje area, committing crimes against civilians, while the military structure in the Srebrenica enclave was a make-shift one, with no unified command and communication among the armed Muslim groups 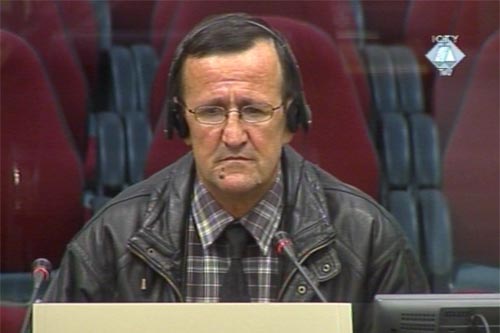 Mustafa Sacirovic, defense witness for Oric
Mustafa Sacirovic, a new witness for Naser Oric's defense, was the chairman of the Commission for the Investigation of War Crimes at the War Presidency of the Srebrenica municipality from July 1992 until the end of the war. In this capacity, he gathered hundreds of witness statements, most of them Muslims, survivors of ordeals during the war. The witness spent most of his time in the Srebrenica hospital. There, he "got information about the crimes against civilians in Podrinje from the wounded and those who had brought them in". Some claims made by the defense were corroborated by video recordings made by Sacirovic during the war.

The witness described the murders and expulsion of the Muslim civilians in Podrinje, including the crimes committed in May 1992, when more than 60 Muslim civilians were killed in Glogova, several Muslims in Hranca, among them a five-year-old girl, and in the villages of Joseva and Jagodnja, where the victims included several women, one of whom was pregnant.

Sacirovic says that such crimes happened every day, that Muslims were expelled from their homes and that groups of people who had fled into the woods or the villages that the Serb army had not entered yet numbered between a few hundred and several thousands. Sacirovic claims that he had visited 20 to 30 such groups and showed a video tape he had made during one such visit. The witness confirmed the defense argument that civilians had been targeted both by artillery and infantry attacks, as they sheltered in the woods or moved about foraging for food.

Because of the "unbearable situation", Muslims organized several armed groups to defend the fleeing civilians, the defense claims. Sacirovic says that when he went visiting the civilians he would go to see some of the armed groups. He claims the fighters were poorly armed, with no logistic support and unable to communicate with each other. He adds he knows "none of the groups" he visited "was under Naser Oric's command".

Sacirovic claims that, on the other hand, the Serb army had a lot of artillery and infantry weapons, that it used chemical agents and that when the VRS carried out its attacks, it had the support of the artillery and air force from Serbia. The witness confirmed the accuracy of VRS documents expounding the plans for an offensive in Podrinje in December 1992. He says the Serb forces were constantly on the offensive until the spring of 1993 when they came near Srebrenica, but failed to take it because of the arrival of the UN forces.

The prosecution started the cross-examination of Mustafa Sacirovic as today's session drew to a close. It will continue tomorrow.