POTS AND PANS AS WEAPONS

In the spring of 1992, Muslims from Srebrenica did nothing but defend themselves against the attacks by Serb forces, Naser Oric's defense is trying to prove. Civilians and poorly armed volunteers managed to make the Serb forces retreat from the village of Rakovici by "banging on pots and pans" 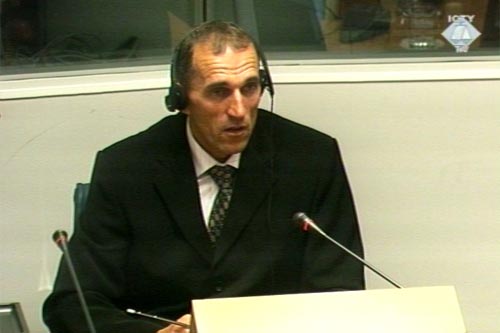 Omer Ramic, defense witness for Naser Oric
"Bosniak movements in the Srebrenica area from March 1992 until March 1993 were a spontaneous response to the attacks by Serb forces," claims defense witness Omer Ramic at the trial of Naser Oric. He is from the village of Potkorijeni north of Srebrenica.

Ramic describes how on the eve of the conflict the Serb population was issued arms and how refugees from Skelani and the Muslim villages near the Drina river started arriving. Those villages had already come under attack. There were about thirty refugees in his home, he said.

The Serb people were armed by the JNA, the witness said, adding that in March 1992 he personally saw the weapons being unloaded from military helicopters bearing the Red Cross insignia near the village of Ratkovici. He heard from others about arms deliveries from military trucks in other locations.

Together with other residents of Potkorijeni, Ramic participated in the defense of the village. He denied the allegations made by the prosecution that his unit had more than a hundred armed and uniformed soldiers. He says that "there were no uniforms," and as for weapons, they had "a few hunting rifles and some home-made rifles". They would sometimes manage to seize some automatic rifles in an action.

One such action was conducted in late June 1992 in the village of Ratkovici. The indictment alleges that the units taking part in that action were under the command of the accused Oric. Ramic denied that it had been an organized military action, claiming it was "the starving people heading for Ratkovici with a handful of poorly armed volunteers in desperate search of food, above all."

The civilians took from the village everything they needed, including the construction materials they needed to build shelters. By shouting loudly and banging on "pots and pans", the witness claims, they scared the Serb units. The troops withdrew, leaving their weapons, including two mortars, behind them.

The armed group from Potkorijeni was no military formation, Ramic said, adding that military formations are not referred to in documents until 1994, after the demilitarization. Even then, the witness contends, those were merely "paper units", because all the weapons had to be handed over and those units could not mount any actions.

Omer Ramic's testimony will continue tomorrow, when he will be cross-examined by the prosecution.