FIGHTERS UNDER PRESSURE FROM CIVILIANS

BH Army units in Srebrenica did not coordinate the "torbari" as they foraged for food, but they did attack Kravica "under pressure from civilians," Kada Hotic claims, testifying as Naser Oric's defense witness 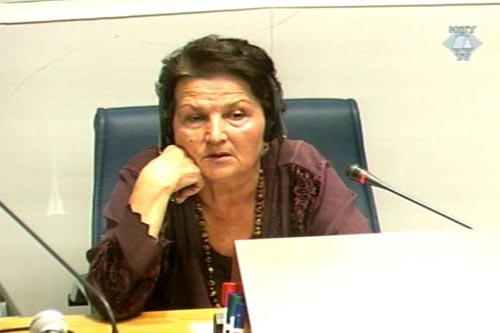 Kada Hotic, witness in the Oric trial
"There could not have been any coordination between the fighters and the civilians," Kada Hotic said, testifying as Naser Oric's defense witness. She repeated that in 1992 and 1993, thousands of starving civilians – called the torbari (people carrying bags) – followed the units of the BH Army units in the Srebrenica area, in search for food.

Prosecutor Gramsci Difazio put it to the witness in cross-examination that the movements of "thousands of civilians" could not have been spontaneous, and that someone had to have informed them in advance of any forthcoming attacks by the army and coordinated their movements in the area where actions were taken. The witness, however, maintained that no one had directed the torbari – she herself was among them. "If we didn't go there, we had no food, because the fighters couldn't bring the food to us. It all happened spontaneously, on the run, so to speak," Kada Hotic said.

The judges did ask for additional clarifications about how thousands of people could get information about the time and place where actions would be carried out and about how to get there. "We knew the approximate time when the attack was planned to take place, and about how to get there," the witness said, adding that this was a "public secret", that this was usually in the "early morning hours" and that civilians "came to those places from all over, taking various routes."

Answering questions the defense counsel asked in re-direct, the witness explained that the torbari would come to the place where the army units carried out their actions at different times. Thus she would sometimes leave in order to go to such a place only to meet a group of civilians already on their way back to Srebrenica with their booty.

It was difficult to distinguish fighters from civilians, Kada Hotic repeated. People who had arms would join the units on a voluntary basis and "sometimes they would go into action as fighters and sometimes as civilians foraging for food”. On the latter occasions, she claims, they carried rifles "only for personal protection."

Naser Oric commanded the attack on Kravica on 7 January 1993, the prosecution alleges. As Kada Hotic said, the BH Army units carried out the attack "under pressure from the people" who were facing disaster. "People faced death, either from starvation or cold and they asked the fighters to do something in Kravica," the witness said. She claims she learned about the action in the morning of 7 January. When she got to the village, only the hay had been set on fire – no houses were burning.

The prosecution has charged Oric with wanton destruction of houses and property not justified by military necessity in the attacks on the villages in the Srebrenica area in 1992 and 1993. Naser Oric's defense case will continue next week.