Miroslav Bralo a/k/a Cicko pleads guilty to crimes in Ahmici and other locations in the Lasva valley. The plea agreement is unconditioned. Instead of trial, there will be a sentencing hearing for him 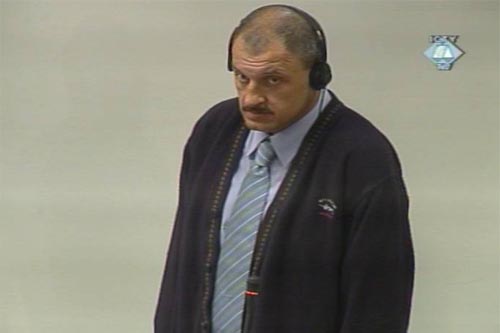 Miroslav Bralo in the courtroom
Miroslav Bralo Cicko pleaded guilty today to the crimes in Ahmici and other locations in the Lasva valley. His plea agreement with the prosecution contains no provisions on his possible cooperation or a recommendation for a sentence, as has been the practice so far before the Tribunal.

"The plea agreement with the accused has been reached without any persuasion; he has not promised any assistance to the prosecution, nor have there been any promises made to him – the parties therefore do not make any recommendations as to the length of the sentence," prosecutor Mark Harmon said today at the hearing. Bralo's lawyer Jonathan Cooper added that this guilty plea "reflects the desire of the accused to express his remorse without any conditions."

As he entered his plea on the eight counts of the indictment charging him with the murders in Ahmici and surrounding hamlets, torture, rape, unlawful detention and inhumane treatment, Bralo said eight times, "I'm guilty and I'm sincerely sorry."

Bralo confirmed to the judges that he had made the plea "of his own will" and that he was aware of all the consequences thereof, including the possibility to be sentenced to life imprisonment. In addition to the plea agreement and the factual basis, the prosecutors filed today the amended indictment. Instead of 21, it now contains 8 counts. According to the prosecutor, it "contains most of the criminal conduct described in the initial indictment and the added charge of persecution on the basis of the crime in Ahmici."

Bralo surrendered to the Tribunal in November 2004, after his indictment was unsealed. The indictment itself had been issued nine years earlier.

The amended indictment alleges that on the eve of the attack on Ahmici, Bralo was released from the Kaonik prison, that he joined the "Jokers" unit of the HVO in order to take part in the attack on Ahmici, whose "purpose and objective [...] were to to ethnically cleanse the village, to kill all the Muslim males of military age, to burn all Muslim residences, and to forcibly expel all the Muslim residents from the village." On the morning of 16 April 1993, Bralo came to a Bosniak house in Nadioci, in Ahmici area, accompanied by other five soldiers. Stipo Kristo and Josip Jukic killed "Osman Salkic and his wife Redžiba Salkic, and Miroslav Bralo killed their daughter, Mirnesa Salkic, with his knife."

The indictment further alleges that Bralo and Nikica Safradin escorted a group of 14 Bosniak civilians, including women and children, who had previously escaped from the Ahmic/Nadioci area. "Nikica Safradin shot and killed all 14 persons being escorted. While these killings took place, Miroslav Bralo stood guard over the victims, preventing any possibility of flight.

Bralo also pleaded guilty to taking part in the blowing up of the Ahmici mosque, burning of houses and expulsion of the residents from the village. He pleaded guilty to having killed three more Bosniak detainees in the weeks that followed those events and repeatedly raping a Bosniak woman in the Jokers base, to forcing detainees to dig trenches and using them as human shields.

Following the guilty plea, a hearing will be held, probably in October, at which the prosecution and the defense will present their recommendations for the sentence.