SAME GOALS OF THE ARMY AND THE ASSEMBLY

“It is normal for the army to be answerable to the assembly for its activities and for the functioning of the defense system”, prosecution witness Osman Selak says at the trial of the former Bosnian Serb Assembly President Momcilo Krajisnik. 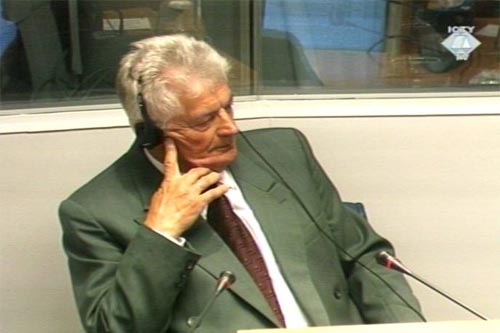 Osman Selak, witness in the Krajisnik trial
The Bosnian Serb Assembly shared the same goals with the army that it had formed: annexing Republika Srpska to FR Yugoslavia, prosecution witness Osman Selak said at the trial of the former Bosnian Serb Assembly President Momcilo Krajisnik, accused of genocide and persecution of non-Serbs in Bosnia and Herzegovina.

“The army executed the tasks assigned to it by the Assembly”, said the witness, who had been among the rare Bosniaks and Croats remaining in the JNA (Yugoslav Army) in 1992. Selak ran a JNA logistics base in Banja Luka, but he retired after the former federal army was transformed into the Army of Republika Srpska in 1992.
.
Krajisnik’s defense counsel, however, is seeking to establish that the “Assembly had no executive power with respect to military operations”, so he asked the witness whether he knew of any orders issued by the Assembly to the army. The witness recalled an Assembly request for the army to ‘protect Serb people and its permanence in Yugoslavia’. “I don’t know of any other cases, just as I don’t know that the assembly had ever intervened to punish any crimes”, Selak added.

The judges sought a clarification concerning Selak’s previous testimony at the trial of Radislav Brdjanin (former head of the Banja Luka Crisis Staff), when he testified that “the army could be commanded by Radovan Karadzic only, as he was the President of the Republic and army commander-in-chief”. Selak confirmed it, while adding that the “President of the Republic was obliged to inform the Assembly about the execution of tasks” on the ground: “It is normal for the army to be answerable to the assembly for its activities and for the functioning of the defense system”.

The Trial Chamber also requested clarifications about the authority of crises staffs – which, according to the indictment, had been established by the Serb Democratic Party (SDS) to help establish Serb territories within Bosnia and Herzegovina. As a former SDS leader, Krajisnik is accused of participating in the establishment of crisis staffs and of de facto controlling them.

According to the witness, the Banja Luka Crisis Staff had competence over the local economy, civilian police and paramilitary forces – over everything except the army. However, it coordinated its activities with the army. “Volunteer, or paramilitary units executed the dirtiest work”, Selak added.

The defense counsel suggested, however, that “the paramilitary forces had acted independently in most cases and done what they wanted”. He asked the witness whether he knew of any crisis staff order issued to the paramilitaries. The witness could not give an example saying that, being a Bosniak, he “was not allowed to hear certain things”. But he claimed that such armed forces could not have acted without the knowledge of the authorities, army or police.