As the trial of Slobodan Milosevic continues, witness Mitar Balevic stated that “more Albanians were killed by their own compatriots… than died in the conflicts with the Serbian military and police.” The witness denies that the Kosovo Serbs were Milosevic’s “strike force” 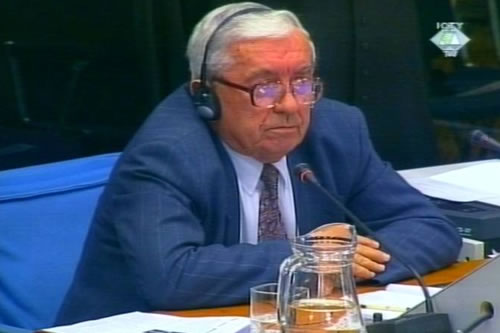 Mitar Balevic, witness in the Milosevic trial
After his recovery from the flu which caused the trial to be adjourned last week, Slobodan Milosevic was back in courtroom today to continue the examination of defense witness Mitar Balevic, former League of Communists and Serbian Socialist Party official in Kosovo.

In the finale of the examination-in-chief that began on 25 January, Balevic confirmed the claims about the “crimes of the “Albanian terrorist gangs” presented to him by Milosevic, quoting from the FRY Government “White Paper” about the KLA attacks between 1995 and 1999. Noting that the victims of those crimes were not only Serbs and Montenegrins but Albanians too, Balevic stated that “more Albanians were killed by their own compatriots… than died in the conflicts with the Serbian military and police.” The military and police, Balevic said, “protected the Albanian people as much as the Serbs and Montenegrins, not making any distinctions… and they only fired when attacked.”

According to Balevic, the only victims of ethnic cleansing in Kosovo were Serbs and Montenegrins. He described how in the spring of 1999 he encountered columns of Albanians in Pristina “calmly going to the train and bus stations with their luggage in their hands”, which to him “looked like an orchestrated column.”

This version of events in Kosovo was challenged by the prosecutor in the cross-examination. At the beginning, prosecutor Geoffrey Nice quoted to the witness excerpts from an OSCE report describing several incidents in 1998 and 1999. Balevic confirmed all the incidents – murders and abductions – which, according to the OSCE were committed by KLA members. For all incidents that were blamed on the Serbian forces or authorities - such as abductions, murders, burning of bodies, attacks and plunder of Albanian villages or the firing of several hundreds of Albanian miners – he claimed that he “knows nothing” about them.

The prosecutor challenged Balevic's version of the famous meeting in Kosovo Polje on 24 and 25 April 1987 and the events that followed by presenting the version of Miroslav Solevic, one of the leading Kosovo Serb figures in late eighties. In his interviews for the BBC and Belgrade Borba, Solevic described in detail the preparations for Milosevic’s arrival in April 1987. The preparations included a trailer full of rocks the protesters threw at the police to provoke them into responding, thus creating the opportunity for Milosevic to say the famous sentence, “no one must beat you,” which launched his career as a leader. “He walked into the hall as the chairman of the Central Committee of the Serbian League of Communists, and left it as a leader. We wanted a leader, but we got a tsar,” Solevic said in one of the interviews. When the prosecutor claimed that the accused used the meeting in Kosovo Polje to impose himself as the leader of all Serbs, Balevic responded that Milosevic “merely took his place at the forefront of the fight to save the Serb and Montenegrin people.”

Balevic contests Solevic’s interpretations and notes that there was an “ideological split” between them later. He also rejects Solevic’s claims that the Kosovo Serbs became Milosevic’s “strike force” and that their rallies “toppled the leaderships in Vojvodina and Montenegro.” According to Balevic, those were “spontaneous, organized rallies” where Serbs and Montenegrins from Kosovo spoke “in a calm and dignified manner” about their suffering and sought support. Balevic also contests Solevic's claim that “everything was in place for the toppling of the leadership in Bosnia and Herzegovina,” but that Milosevic changed his mind and ordered that the planned rally in Jajce be cancelled.