DID PEOPLE IN RACAK "RUN" OR WERE THEY "TAKEN" TO THEIR DEATHS?

Testimony of a German journalist who is an "amateur forensic scientist" and who investigated the events that took place in Racak on 15 January 1999. Milosevic opposes the tendering of "BBC odds and ends" into evidence 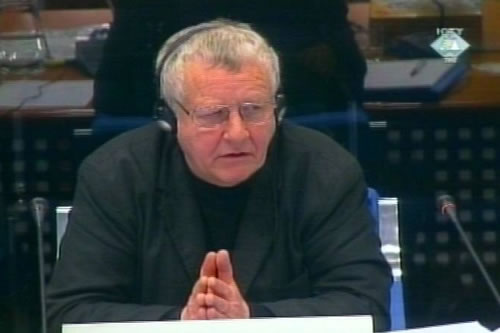 Bo Adam, witness in the Milosevic trial
In the part of the prosecution case which dealt with crimes in Kosovo, Slobodan Milosevic often quoted the views expressed by Dr. Helena Ranta, head of the European forensic team that investigated the events in the village of Racak on 15 January 1999. Milosevic referred with particular frequency to her refusal to qualify the Racak incidents as "massacre".

In March 2002 Dr Ranta testified in Milosevic case, as a court witness, and confirmed that after two investigations on the scene of the crime she had found irrefutable evidence that the scene with more than 20 dead bodies in a ditch near the village had not been staged, that the people had really been killed at the site where they had been found, that they had been shot at point-blank range and that all the victims had been unarmed civilians.

After that Milosevic did not quote her any more. Today he called to the stand a witness who claims that the Finnish forensic scientist "had everything upside down", that her statements were "abused by the politicians" to justify their war against Serbia and that "lazy journalists" took all that "for granted" thus spreading a false picture of what happened in Racak.

Witness Bo Adam is a journalist himself, but not a lazy one. Quite the contrary, as many things looked suspicious to him, he decided together with some other colleagues from the Berliner Zeitung to investigate what had really happened in Racak. They managed to obtain the reports of post mortems carried out by pathologists from Finland, Serbia and Belarus. In March 2000, Adam visited Racak, went to all the crucial sites and spoke with several villagers. He did not manage to speak to Dr. Helena Ranta, who was in Racak at the time, but refused to be interviewed by him.

The German journalist, who considers himself an "amateur forensic scientist" concluded, on the basis of the investigation that "there was no execution" in Racak, that the woman and the child who are listed as victims "were killed by bullets fired from a range of about 100 meters", that there were KLA members "present and active" in the village and that about a dozen fighters who had been killed – whose names are not listed in the report of the Verification Mission on victims – had been buried in a KLA cemetery in the nearby village of Malopoljce.

In the cross-examination, prosecutor Daniel Saxon showed the witness excerpts from a documentary entitled The Fall of Milosevic in which Goran Radosavljevic, commander of the MUP unit that participated in the "Racak operation", speaks about what happened on 15 January 1999. He says that the operation was planned after they received information that "a family in Racak" was responsible for the killing of three police officers, that the attack was launched in early dawn, that KLA members found on their positions were liquidated in a brief fight, that Racak was shelled and that the police and the military then went to the other side of the village in search of the terrorists.

Slobodan Milosevic opposed the admission into evidence of what he called a "BBC propaganda program", noting that he would not be opposed to it had it contained an "integral speech of the MUP officer... not the odds and ends, as presented by BBC". The prosecutor promised to try to obtain the "integral speech", i.e., a full transcript of the interview the MUP commander gave the film authors.

In one of his texts published in the Berliner Zeitung, not tendered into evidence by Milosevic, but located by the prosecutor, Bo Adam recounts a story he heard from his Albanian guide, who showed him the house in which 25 men had hidden on 15 January 1999. Once they were discovered, the men started to run, but they ran into the Serb forces who opened fire on them. This event was described in a very similar manner in the indictment, but in the indictment, the 25 men were caught in the house in which they were hiding, were first beaten and then taken uphill and executed there.

According to Adam, the two versions "are not exactly consistent", because the indictment alleges that those men were "taken away" while he says in his article that they "ran off". According to him, this representss a "crucial difference in the detail". The prosecutor had no other questions for the witness after that.