MILOSEVIC – “A VICTIM OF DEMONIZATION”

According to Vladislav Jovanovic, “nowhere has the demonization of countries and peoples – as a new form of racism – reached such heights as in the case of Serbia and the Serb people.” According to Slobodan Milosevic, the indictments on which the Tribunal is trying him are “an expression and result of this demonization.” 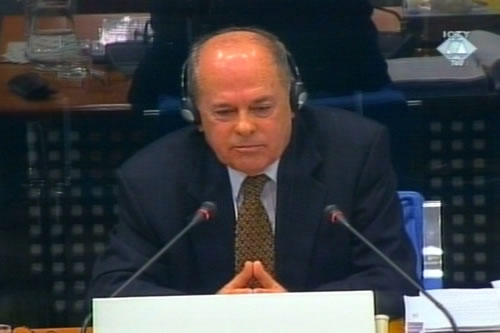 Vladislav Jovanovic, defense witness for Milosevic
The wars in Croatia and Bosnia-Herzegovina were planned and caused by the former presidents of the two republics, Franjo Tudjman and Alija Izetbegovic; the international community committed “fatal mistakes”; and the indictment against Slobodan Milosevic is “an expression and result of the demonization of Serbia and the Serb people.”

This is a summary of the second day of testimony by the former Serbian and FRY foreign minister Vladislav Jovanovic at the trial of the former president of Serbia and FRY Slobodan Milosevic.

The accused tried to prove his argument about the responsibility of Tudjman and Izetbegovic by reading to the witness excerpts from a book by Russian historian Yelena Guskina, in which various statements by former presidents of Croatia and BH are quoted. There is a quote from a speech in which Tudjman says that “the war could have been avoided” but in that case, “the goal of creating an independent Croatian state would not have been realized.” There is also Izetbegovic’s statement that he was “ready to sacrifice peace for a sovereign BH,” but that he would not “sacrifice sovereignty for peace.” Jovanovic confirmed that former presidents did in fact state that and that “both were conscious of the fact that they could not realize their design without war.” They therefore “planned it, and in Croatia’s case, provoked it.”

Milosevic and his witness tried to corroborate the second argument – about “fatal mistakes made by the international community” – by quoting statements made by Western politicians pointing to the responsibility of “the secessionist republics” for the Yugoslav crisis and to the “premature recognition” of their independence. Jovanovic confirmed that many Western politicians “admitted later that mistakes had been made”, and that in attempts to settle the Yugoslav crisis, “deals were struck at Yugoslavia’s expense.” According to Jovanovic, one such deal was made in December 1991, at the summit of the twelve European heads of state in Maastricht, where the treaty creating the European Union was adopted. He said that in order to pander to Germany, to make it accept the concept of a monetary union and to give up on some of its political demands, the other member-states of the EC agreed to recognize the independence of the “secessionist republics.”

Finally, Milosevic tried to prove his third argument – about the indictment against him as an “expression and result of the demonization of Serbia” – by quoting from a text by Jovanovic, published in 2001 in a book about Garasanin’s Nacertanije. Jovanovic writes about the “demonization of entire countries and peoples” as “a new form of racism and a precursor of illegal military actions.” Claiming that “nowhere has this demonization reached such heights as in the case of Serbia and the Serb people,” Jovanovic in that text urged the UN to declare the demonization of countries and peoples illegal.

Having read the excerpt, Milosevic asked Jovanovic what he wanted to say with this text, but Judge Bonomy intervened, ordering the witness not to answer the question. The other two judges – Robinson and Kwon – outvoted him, noting that this was not the first time that the term “demonization” is used in the courtroom and that it was “part of the defense of the accused.” The witness then explained that the objective of his text was to “show the UN that the time was ripe for the inclusion of demonization on the list of the phenomena of hatred and intolerance, such as racism and xenophobia, in order to protect at least the future peoples from the horrible treatment accorded to the Serb people. It has been exposed to terrible contempt, insults and has been portrayed in the most negative light over a prolonged period”, he said.

Vladislav Jovanovic’s testimony will continue tomorrow with the cross-examination by the prosecutor.