“NO ONE MUST BEAT” WHOM?

When Milosevic uttered that sentence on 24 April 1987 at Kosovo Polje, he meant only the “few men” who gathered around him to complain that the police had beaten them for no reason, not the entire people or all Serbs, claims Mitar Balevic, Milosevic’s host at the time 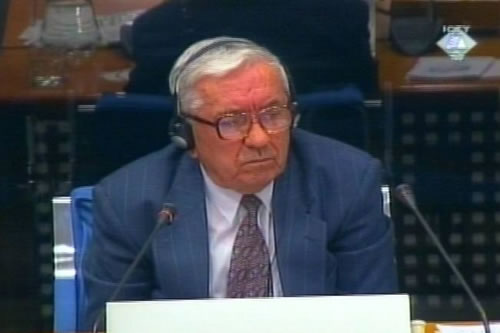 Mitar Balevic has spent virtually entire life in Kosovo. He was involved in politics for five full decades: first in the League of Communists (SK), then in the Socialist Party of Serbia (SPS). In April 1987, he was the host to the then Chairman of the Serbia’s SK, Slobodan Milosevic, at a meeting in the Community hall in Kosovo Polje, where representatives of the Kosovo Serbs and Montenegrins spoke about their suffering under the pressure of the Kosovo Albanians.

During that visit, Milosevic uttered the famous sentence, “No one must beat you”, which served to secure his position as the Serb national leader, the prosecution contends. Milosevic claims that this sentence referred “only to the few people” who had gathered around him in front of the Community Hall building to complain that the police had beaten them for no reason, as shown on TV footage. It did not, therefore, refer to the “entire people” or “all Serbs.”

In the course of Balevic’s testimony, Milosevic showed footage from a 45 minute TV program on the rally at Kosovo Polje, containing excerpts from speeches made by participants – Serbs and Montenegrins – who complained about the “unbearable” position in which they were, “pressure”, “threats” and “terror” they were exposed to on the part of the Albanian majority in Kosovo and who demanded “vigorous action” from the Serbia’s leadership to stop the emmigration of the Serbs and to ensure their safety. At the end of the meeting which lasted 13 hours, Milosevic told the “comrades” who had gathered there that “the brotherhood and unity of all the peoples who lived here… was the only platform for the resolution of the Kosovo problem.” According to Mitar Balevic, this is the exact opposite of what the prosecution is claiming: that on that occasion, Milosevic in fact “supported the Serb national agenda.”

According to Balevic, the suffering of Serbs and Montenegrins in Kosovo began as early as in 1941, under the military occupation of the Germans, Italians and Bulgarians and under the rule of civilian authorities of the local Albanians. After the war, the witness claims, “the Albanian nationalism gradually intensified”. It was based on the demand that Kosovo be granted the status of a republic, which would, according to him, be merely the first stage in the process of Kosovo’s secession from Serbia and its annexation to Albania.

Countering the prosecution argument about the discrimination against the Kosovo Albanians, particularly after the year 1989, Balevic claims that Albanians never were in a subordinate position, and that after the constitutional changes in the late eighties, “they quit their jobs en masse, claiming they had been fired, in order to show the world that they were victims of persecution.”

Mitar Balevic will continue his testimony tomorrow, but before that, a German journalist Bo Adam will be called to the witness stand. Together with some other colleagues, he investigated the events in Racak on 15 January 1999 and he reached the conclusion that there had been “no massacre” there.