As his cross-examination continued, Professor Ratko Markovic claimed that “no one had asked him to draft the constitutions of Serbia and FRY”, and that “no one had given any instructions” to him and to the other drafters as to what should be in the constitutions, since “they enjoyed autonomy as experts”. The plan to create “an enlarged Serbian state” or “an ideal demand…by a man dealing with those things.” 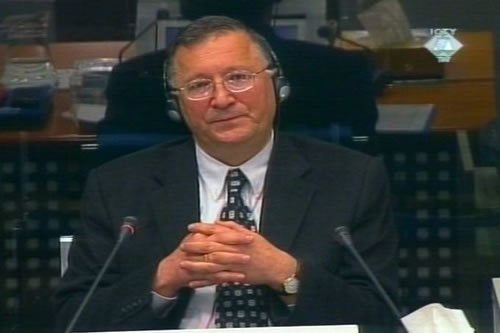 Ratko Markovic, defense witness for Milosevic
An event from 1997 was used today by prosecutor Geoffrey Nice to illustrate the argument that witness Ratko Markovic had “served” Slobodan Milosevic with his “liberal approach to law” for over a decade by tailoring constitutions and laws to fit him. As Milosevic’s second term in office as Serbia’s president was drawing to a close, Professor Markovic presented his “expert interpretation” to the effect that Milosevic could get yet another term. Markovic argued that Milosevic’s first term “can be considered as non-existent”, as he had not used it completely. This “expert interpretation” was too liberal even for Milosevic, and he thus decided to become the president of Yugoslavia.

Nice asked Markovic, who was a deputy in the Federal Assembly from 1992 to 1996, whether he knew what funds had been allocated in the state budget for the “Red Berets” – he described them as a paramilitary formation – and for financing the armed forces of the Republic of Serbian Krajina and Republika Srpska. Markovic replied that as a deputy he had been acquainted with the budget, but that the budget “was full of figures and who would want to look at all those figures.” As he claims, he only looked at figures that were of interest to him: for education, science, culture…

In 1992, Professor Markovic published an article in the Pravni zivot journal, in which he wrote that the FR Yugoslavia, as a joint state of Serbia and Montenegro, was the “core and basis for a gradual unification of the Serb lands and the Serb people, including the areas in which the Serb people had the majority in Croatia, Bosnia and Herzegovina and partly in Macedonia.” The prosecutor contends that in this text Markovic “showed his hand”, revealing the way in which the Serbian political leadership thought in 1992 and the plans it had to create an “enlarged Serbian state”. Markovic, however, denied this and noted that he merely presented his “scientific opinion and not a political view”. When Nice asked him what he meant by “gradual unification”, the professor replied that this was “an ideal demand, not a political slogan” and that this was merely “a view of a man dealing with those issues.”

Since Markovic claimed in the examination-in-chief, in response to questions asked by the accused, that the international military presence in Kosovo had not been discussed at all at the talks in Rambouillet and that the Serb delegation had been informed about that the very last day, Nice read out an extract from a letter sent by Professor Markovic, as the head of the delegation, to the three international mediators on 23 February 1999, indicating their readiness to discuss “the presence of the international forces in Kosovo, in order to implement the agreement.”

Markovic, however, stuck by his initial statement, insisting that in his letter he referred to international forces, “but not military forces, as they can be civilian forces too.” Prosecutor Nice merely stated that this response by Milosevic’s defense witness was “unrealistic.”