Prosecutors are trying to prove that in June 1993, the BH Army subjected Croat detainees in Mehuric near Travnik to abuse, while defense lawyers claim the BH Army, together with the police, actually tried to protect them. 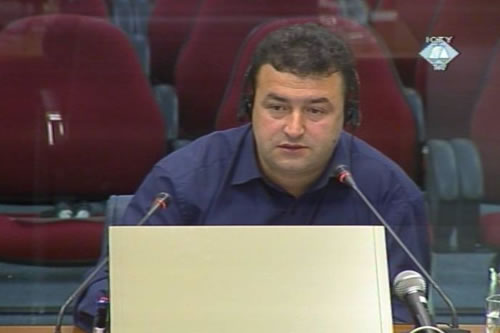 Sead Jusic, defense witness for Hadzihasanovic
Responding to allegations that the BH Army 3rd Corps personnel abused Croat detainees in Mehuric near Travnik, the defense of the 3rd Corps commander at the time, Enver Hadzihasanovic, claims the BH Army, together with civilian police, actually tried to protect the detainees.

“Quite a few civilians of Croat ethnic origin were put in the elementary school in Mehuric. Men of military age were put in two separate rooms," the then-commander of the Mehuric police station, Sead Jusic, said. "As part of an arrangement with the army, we were tasked with guarding them to prevent anything from happening to them," said Jusic, adding he was told, "the mujahedin were roaming the villages and could do something to them."

One or more mujahedin actually tried to get into the school, but the police, Jusic claims, did not let them in. "Weapons were drawn, but they did not get in. I do not know what they wanted."

Earlier that month, the mujahedin took about 30 men out of a column of Croat civilians being escorted by the BH Army from Maline to Mehuric and shot them to death. Hadzihasanovic is charged with this crime. The defense claims that his Corps did not have any links with the foreign fighters.

Regarding the treatment of detainees in Mehuric, prosecution witnesses and former detainees testified that detainees were taken to be interrogated and beaten. Jusic, however, said "no one reported any instances of abuse to him." He remembers just one case of improper conduct by a BH Army soldier. "A soldier whose brother had been killed hit a wounded detainee who was being taken to have his dressings changed. This soldier was taken away by the Military Police. I think that he received a prison sentence of 15 days.”

When judges asked him to specify who was in charge of the prisoners, the witness said he did not know. He repeated that as a police officer, he had been given the task of protecting and guarding them, and that for the duration, he was re-subordinated to the 306th Brigade.