Defense witness states no one in the 306th Brigade could control or punish the mujahedin; prosecutor notes BH Army tried to integrate foreign fighters into its ranks instead of taking radical measures against them because of their crimes. 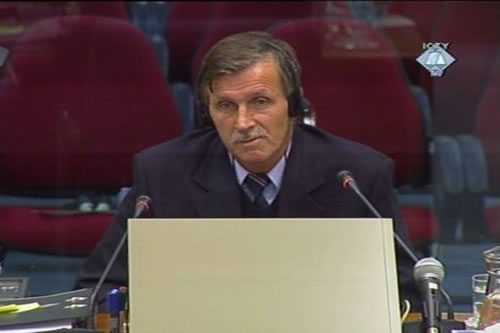 Remzija Siljak, defense witness for Hadzihasanovic
In an effort to prove there were links between the BH Army and the mujahedin in Central Bosnia, the prosecutor noted the BH Army tried to integrate foreign fighters into its ranks instead of taking radical measures against them because of the crimes they committed.

Enver Hadzihasanovic is charged with the attacks committed by the mujahedin in Miletici, Maline and other villages. He is a former BH Army commander in Central Bosnia. While prosecutors try to prove the BH Army was using foreign fighters in its operations, Hadzihasanovic contends he did not have any control over the mujahedin’s actions.

Defense witness Remzija Siljak testified last week that no one in the 306th Brigade could control or punish the mujahedin, who had their camp and carried out combat operations in the 306th brigade’s area of responsibility east of Travnik. During today’s cross-examination, the prosecutor suggested that "there must have been a link between the BH Army and the foreign fighters,” because had it not been the case, the Army would not have wanted to include in its ranks a group it could neither control nor discipline. In the second half of 1993, a detachment named El Mujahid was set up. It consisted of foreign fighters and their local followers. The 3rd Corps tried to attach it, but, according to the witness, was unsuccessful.

Prosecutors and judges wanted to know why the BH Army was unable to discipline a group of people that was substantially smaller in number; or rather, why the mujahedin had been treated as "untouchables."

“Some of the locals joined the mujahedin and any armed response to the problem would have had unforeseeable consequences. This had all gone beyond the level of our brigade," defense witness Siljak replied. He is the former chief of staff of the 306th Brigade and the second witness called by Hadzihasanovic's defense.

When asked what the mujahedin’s role was in combat operations in mid-1993--when the crimes in Miletici, Maline and elsewhere were committed--the witness said that his brigade "did not know how they carried out their combat operations". He claimed they were just an "informal group," who would show up to "take the booty after the BH Army had liberated a part" of the territory.