WAS THERE A LINK BETWEEN THE BH ARMY AND THE MUJAHEDIN?

Although the defence argues that the BH Army 3rd Corps did not control the mujahedin--that it did not even have any contact with them--the prosecution views the lack of any decisive action against the foreign fighters as evidence that there were links between the two. 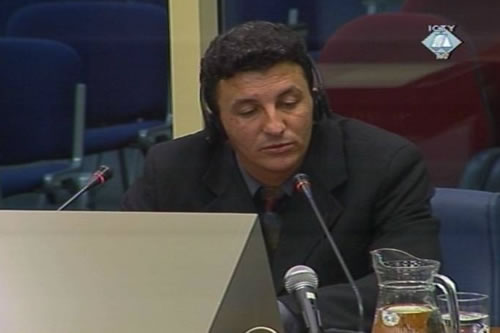 Dervis Suljic, defense witness for Hadzihasanovic
Enver Hadzihasanovic’s defence tried to challenge accusations that the BH Army is responsible for the ritual execution of four captured Croats in the village of Miletici, committed by the mujahedin. The defence argued that BH Army personnel had problems with the foreign fighters in the 3rd Corps’ area of responsibility.

Dervis Suljic from Miletici, a defence witness, stated that after the mujahedin raided his village on 24 April 1993, they captured his father and two other relatives, together with Croat villagers. Suljic was working in Rudnik at the time, in the BH Army 306th Brigade headquarters, as assistant to the commander for intelligence. He hurried to Mehurici to look for his father in the column of prisoners escorted through the village by the mujahedin, en route to their nearby camp. But when he tried to approach his father, “a masked Arab” barred his way, pointing “a weapon with a rifle-launched grenade attached to it.”

Suljic said that first the Bosniaks and then the Croats from Miletici were released only after the brigade command engaged in talks with the mujahedin. He added that the Croats were then put up in Bosniak houses near Mehurici.

However, the prosecution argues that the mujahedin operated in Central Bosnia under the control and in collaboration with the BH Army, which would make Hadzihasanovic responsible under command responsibility for their actions. Although the defence argues that the 3rd Corps did not control the mujahedin, that it did not even have any contacts with, the prosecution views the lack of any decisive action against the foreign fighters as evidence that there were links between the two.

Noting that the witness was an intelligence officer who also happened to be from Miletici, the prosecutor asked him whether his brigade had gotten to know the names of the mujahedin who committed the murders in Miletici. The witness responded that he had been responsible for gathering information in other areas.