“The commander gave me a direct order to protect the houses, particularly the monastery and the church when we enter Guca Gora,” testifies Fahir Candzic, former commander of the 2nd Battalion, 306th Brigade, who entered Guca Gora with his troops on 10 June 1993. He testified as a defense witness at the trial of the former BH Army commander accused, among other crimes, of destruction in Guca Gora. 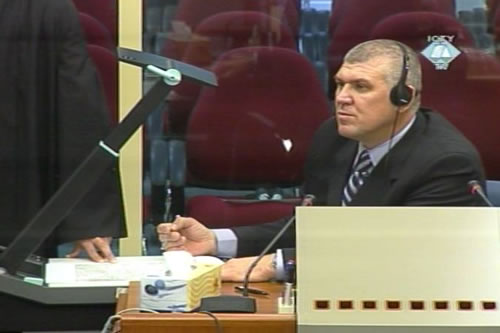 Fahir Candzic, defense witness for Hadzihasanovic
The BH Army – as the defense of Enver Hadzihasanovic is trying to prove – took special measures in the course of military operations in June 1993 to prevent the destruction of houses and places of worship in Croat villages, and in particular the Catholic monastery in Guca Gora.

“The commander of the [BH Army] 306th Brigade gave me a direct order to protect the houses, particularly the monastery and the church when we enter Guca Gora,” testified Fahir Candzic, former commander of the 2nd Battalion, 306th Brigade. He entered Guca Gora with his troops on 10 June 1993 after the withdrawal of the HVO and the Croat population.

“We entered the village without any fighting…. There was not much damage to the village, perhaps just a few barns that had been burned in the fighting on 8 June,” the witness said. “I can say that at that moment, everything was under control.”

It is not clear from his testimony when things got out of hand. A videotape shown by the prosecutor shows foreign fighters, the so-called mujahedin, in the church in Guca Gora. After their “visit,” the interior of the church was desecrated. Witness Candzic, however, states that the mujahedin were not in the village when he passed through it and that he does not know what happened after he left. Candzic does know that special measures were taken to protect religious and cultural monument there.