“MAXIMUM EFFORTS" IN A PROBLEMATIC CONTEXT

The defense argues that when assessing Hadzihasanovic's criminal responsibility, judges should note that his corps, and the entire chain of command, had objective troubles functioning. 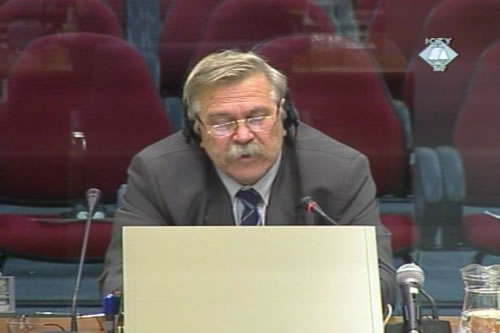 Hasim Ribo, witness in the Hadzihasanovic case
The BH Army had great problems with establishing its chain of command, but it nevertheless made maximum efforts to discipline its troops and prevent crimes. So say all the defense witnesses who have testified so far at the trial of Enver Hadzihasanovic, former BH Army 3rd Corps commander.

Five former Territorial Defense commanders, brigade commanders, and their assistants have already testified – all of them from the Travnik area.

“We had a lot of problems, but we were trying to establish order," Hasim Ribo said. He was commander of the municipal Territorial Defense staff in Travnik in 1992, later appointed commander of the 301st Brigade headquartered in Zenica. "The personnel would go straight home from the frontlines and from their homes to the frontlines…. All our weapons were deployed on the defense lines and the troops would hand them over to the incoming shift," Ribo said.

“There were command and control problems. We had volunteer troops who did not want to go to the front or would abandon their positions," the witness added, explaining that food shortages were a common problem. "Yet we tried to establish some kind of order any way we could."

Other defense witnesses mentioned similar problems, including Zijad Caber, Rezija Siljak and Hamed Mesanovic. The witnesses say that due to of a lack of resources, the brigades in Hadzihasanovic's 3rd Corps were never fully established as they were meant to when the BH Army was created in 1992.

Hadzihasanovic is charged with failing to punish and prevent crimes against the non-Bosniak population in his area of responsibility. His defense, however, contends that in this case, "the general context" in which the accused functioned is "of key importance." When assessing Hadzihasanovic's criminal responsibility, the defense says judges should note that his corps, and the entire chain of command, had objective troubles functioning.