"IF SOMEONE SETS A HOUSE ON FIRE, IT'S ONLY LOGICAL HE WON'T LET YOU PUT IT OUT"

The duty of firefighters in Brcko in 1992 was not to put out fires in mosques and Bosniak homes, but to make sure they did not spread to neighboring Serb houses and buildings. 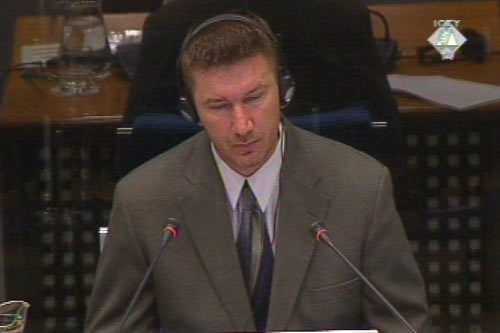 Jasmin Fazlovic, witness at the Momcilo Krajisnik trial
"There were three mosques in Brcko: the Savska, named because it was near the Sava River; the White Mosque, because it was white; and the Wooden Mosque, because it was made of wood. They were razed to the ground within 15 minutes," said Jasmin Fazlovic. In the summer of 1992, he was a firefighter in Brcko. He described how in June or July of that year, at around 2 p. m., there was a tremendous explosion. The firefighters saw from a window of the fire station that the Savska Mosque was destroyed. His colleague, a Serb, then said, "The other two mosques will go now."

They went to another window, from which the White Mosque could be seen. After about ten minutes, they saw smoke and then heard an explosion. They saw the minaret topple. In the meantime, they received a phone call from the Police Station or the barracks telling them not to go to the two mosques but to the Wooden Mosque, since the flames from that mosque could easily spread to the Health Care Center and other buildings in the vicinity.

At that time the third mosque was still standing. The witness claims this indicates it was all done "in an organized way and according to plan." The fire-fighting unit went to the Wooden Mosque. When they were about 500 meters away from it, there was a third explosion. On the scene they encountered soldiers who told them not to put out the fire but to make sure it did not spread to neighboring buildings.

The witness states that they stayed there for an hour or two--just to be on the safe side-- because as a professional fire-fighter, he determined the fire could not spread to other buildings that were not close enough to be at risk. The Wooden Mosque burned to the ground and the fire burned itself out.

When war broke out in Brcko on 1 May 1992, Fazlovic was on duty in the town fire station. JNA soldiers came that day and said they [the soldiers] were there "only to prevent conflicts" and that firefighters could continue their work as usual. The fire-fighting brigade was composed of people of different ethnic origin. They all worked together until 4 May, when soldiers of "another army" broke into the fire station, checked their documents, separated Bosniaks and Croats, accused them of being "snipers" and took them to the police station. They were saved from being detained in the infamous Luka camp by a lucky chance: one of the police officers knew all the fire-fighters and persuaded the police commander that they provided an essential service in town and should be returned to the fire station.

After that the witness did not leave the fire station at all until September 1992. At first his Serb colleagues treated him and other Bosniak and Croat firefighters with respect and helped them; that lasted only until they started receiving call-up papers to go to the front. When they returned after a few days, the Serb colleagues threatened them, saying they should "disappear" immediately. They thought they would be sent to the front again if there were Muslims and Croats left to fight fires in Brcko. The witness hid with a Serb friend for a while before he was able to flee town.

Fazlovic testified that paramilitaries often prevented the Brcko firefighters from doing their job. They did not let them put out fires in Bosniak houses unless there were Serb houses in the vicinity.

"If someone sets a house on fire, it's only logical he won’t let you put it out," the witness said.

During its examination, the prosecution focused mostly on the destruction of Brcko’s mosques. In count three ("persecutions on political, racial and religious grounds") of the indictment against Momcilo Krajisnik, the accused is charged with "the intentional or wanton destruction of public property, including cultural monuments and sacred sites." A schedule to the indictment lists Brcko Mosques 1, 2 and 3. Until 1992, these were known as the Savska, White and Wooden Mosques.