DID IZETBEGOVIC ADVOCATE THE STRATEGIC GOALS OF THE SERBIAN PEOPLE?

Momcilo Krajisnik's defense is trying to prove that there are no differences between Cutileiro's plan for BH, Izetbegovic's attitudes and the six strategic goals of the Serbian people in Bosnia and Herzegovina. 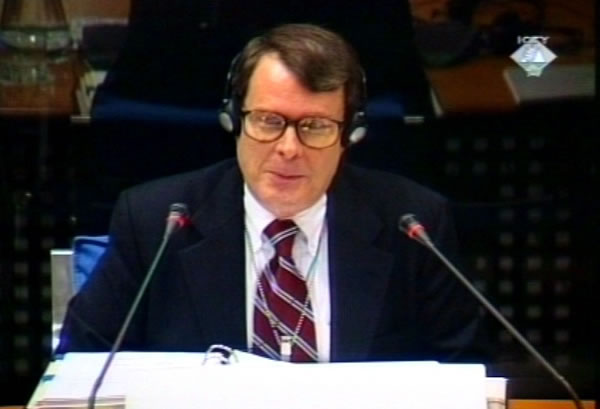 Patrick Treaner, witness at the Momcilo Krajisnik trial
"Serbs should not feel that there is a state border that divides them from Serbia, just as Croats should not feel divided from Croatia, therefore, no passports for Serbs on the Drina River and no passports for Croats on the Una River." This is the sentence uttered by Alija Izetbegovic at a Democratic Action Party congress in December 1991 in a speech now in his Memoirs. Thirteen years later, this sentence was read out in the courtroom of the International Tribunal in The Hague at the request of Momcilo Krajisnik's defense counsel.

British lawyer Nicholas Stewart conducted the cross-examination of prosecution expert Patrick Treanor, trying to prove that "there are no irreconcilable differences" between the so-called Cutileiro plan of February 1992, the "Strategic Goals of the Serbian People" (adopted in May 1992), and the speech by the former BH president. Using as an example the third strategic goal – "the elimination of the Drina River as a border between Serbian States"-- Stewart noted that according to the Cutileire plan, all three constituent units that would be part of the confederal BH could establish close links with the neighboring States, something that Izetbegovic already approved. "Would the close links not include the elimination of borders?" he asked.

The prosecution expert replied that the Bosnian Serb leadership wanted "more than close links" with Serbia and Montenegro. In essence, it wanted to separate its "constituent unit" from the remainder of BH and to annex it to Serbia and Montenegro. According to the prosecution expert, Cutileiro meant "diplomatic, political and cultural links… not the joining of territories" which the "strategic goals of the Serbian people in BH" had in mind.

Unwilling to relinquish his thesis that "there are no inconsistencies" between the Cutileire plan, Izetbegovic and the contents of the strategic goals regarding the BH borders, Krajisnik's defense counsel noted that the "sovereign and independent states of the European Union eliminated their borders." Stewart said, "There are no passport controls there, for instance," adding that the Cutileiro plan, Izetbegovic's speech and the six strategic goals of the Serbian people had the same option. He again quoted the former BH president: "In view of the ethnic composition of its population, the sovereign BH must have special relations with Serbia and Croatia, regardless of their links."

The prosecution expert replied that Izetbegovic said that before BH gained its independence and that the Cutileiro plan explicitly states that links with Serbia and Croatia and their organizations can be established provided they do not threaten the integrity and sovereignty of BH.

"In short, you believe that the strategic goals are irreconcilable with the Cutileiro plan and Mr. Izetbegovic's book, i.e., his attitude at the time?" presiding judge Alphonsus Orie asked the prosecution expert in an attempt to cut short that part of the cross-examination.

Treanor affirmed it and reminded the court what the accused Momcilo Krajisnik said at the 16th session of the Bosnian Serb Assembly on 12 May 1992: the five strategic goals were the corridors between Krajina and Semberija and in the Drina valley, borders on the Una and Drina rivers, the division of Sarajevo and access to the sea for the Republika Srpska – a "subsection of the first one." The “first one” was "the separation from the other two ethnic communities" and the aspiration of the Republika Srpska to become part of a single state with Serbia and Montenegro. This is definitely not something that either Izetbegovic, when he gave his speech in 1991, or Cutilerie, when he drafted his plan in February 1992, could have had in mind, concluded Patrick Treanor.