OF PISTOLS AND MAPS 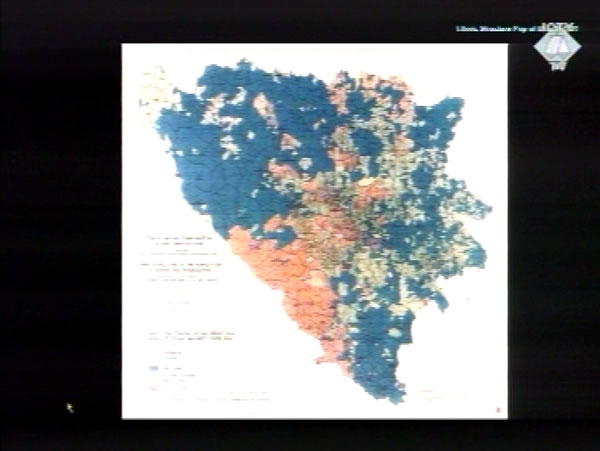 Etnic map of the Bosnia and Hercegovina
Upon his return from peace talks in Lisbon in February 1992, Momcilo Krajisnik informed members of the SDS Deputies' Club that "Europe realised Bosnia and Herzegovina would have to be divided," and then told them what had made him, Radovan Karadzic and Nikola Koljevic happy at their last meeting with the European mediators in the talks about the future of BH.

"We really enjoyed the sight yesterday of Europeans lugging around maps, just like Serbs do. The only thing they did not have were pistols, but maybe they had them hidden somewhere. Because every Serb has a pistol and a map. They all walked around with those maps and tried to persuade us. We then considered our situation, and then Messrs. Karadzic and Koljevic said, 'God, they know better than we do where every creek should run'…"

On the eve of the war in Bosnia and Herzegovina and just at its beginning, Krajisnik and his colleagues at the SDS top worked so hard on drawing maps that their followers sometimes felt that their leaders had forgotten all about them or were neglecting them.

In a collection of 245 intercepted telephone conversations presented by the prosecution at the trial of Slobodan Milosevic, there is a recording of a conversation between Zeljko Raznatovic Arkan and a Radmila Kalaba from the "Serbian Ministry of the Interior at Pale", dated 16 April 1992. When Arkan asks her where Karadzic and other leaders were, Mrs. Kalaba replies scornfully, "They are sitting in Pale, drawing maps." She goes on to explain that Serbs could take "a large part of Sarajevo" and to "force [Muslims] into their little neighbourhood", but there is "no one to give the order".

The maps "drawn in Pale" in April 1992 showed the so-called Strategic Goals of the Serbian People, adopted at the session of the Assembly of Bosnian Serbs of 12 May 1992. In the second half of that year Momcilo Krajisnik presented one of these maps in a RSK Television programme. He stated categorically that the territories held at that time by the Republika Srpska Army "correspond exactly to the ethnic composition map of the former BH, where the areas inhabited by the Serb population are designated” In order to prove that, Krajisnik – on a videotape shown in courtroom last week – briefly held up a flimsy with the map indicating the borders of the "territories of our people in the former BH". The "ethnic composition map" appeared underneath it. He did it so fast that the impression was the two maps were identical: the first one was black and white and the second was a colour map with large blue areas indicating areas with the Serb majority.

In order to show the "visual trickery" Krajisnik used, the prosecutor placed the color "ethnic map" on the ELMO, pointing to the fact that the large blue areas in the Drina basin, Semberija and parts of Western Bosnia controlled by the VRS contained a lot of green and orange "spots" – areas with the Muslim or Croat majority.

It is the prosecution case that those "spots" on the ethnic map have been removed with the other object that, according to Momcilo Krajisnik, "every Serb carries" in addition to maps.