As the trial of Momcilo Krajisnik continues, the court hears the testimony of Mirzet Karabeg, president of the Executive Board in the Sanski Most municipality in 1992 who later became a detainee in the Betonirka detention facility and the Manjaca camp. 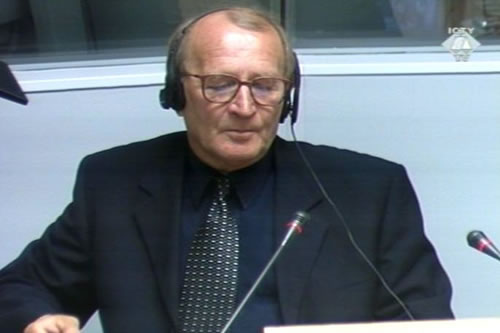 Mirzet Karabeg, witness at Krajisnik trial
As they questioned witness Mirzet Karabeg at the trial of Momcilo Krajisnik, prosecutors tendered into evidence a letter written by the Sanski Most police chief to the military commanding officer of the Manjaca camp. It was from August 1992, and it said, among other things, that the detainees were "operationally processed." When asked what that meant, the witness replied, "They beat us, humiliated us, [and] abused us in order to put us in a situation in which we would admit even those things we did not do." Nine hundred and sixty people from the Sanski Most area were "processed" this way. After giving their statements under duress, they were sent to the Manjaca camp.

After the first multi-party elections in BH, Mirzet Karabeg was president of the Executive Board. His friend Vlado Vrkes was president of the Sanski Most municipality. As Karabeg testified, the aspirations of SDS deputies to establish a separate Serb municipality were already quite obvious in early 1992. Later on, the entire area was to become part of the Autonomous Region of Krajina (ARK). When he asked his friend at the time, SDS member Vlado Vrkes, why they were doing that, Vrkes told him in confidence that the demand to annex the municipality to the ARK had come from "above"--directly from Brdjanin and Krajisnik.

Vrkes also told him that Muslim and Croat deputies would have to accept SDS demands because otherwise, they would no longer be able to count on protection against "Serb extremists.” The "extremists" were members of the Serb Defense Forces (SOS) who were already on the rampage in the municipality, intimidating, provoking and threatening the population. As the witness explained, the paramilitary group, which had about 50 men, was the "long arm of evil": it was financed by the SDS in order to "complement" the party leadership’s policy by instilling insecurity and fear in the people, making them move out of areas they proclaimed as theirs.

Karabeg remained in office until 20 April 1992. On that day, General Momir Talic, commander of the 1st Krajina Corps (still part of the JNA at the time), met with leading political figures in Sanski Most. The witness testified that his speech was quite radical: he condemned the activities of the local SDS leadership and said he would put an end to SOS activities. He also said he would remove the roadblocks and do everything to calm the situation down. General Talic even gave the witness his telephone number, instructing him to call if there were any problems.

Indeed, there were problems the very next day. Serb police officers the witness recognized (although not their insignia) barred his way at the entrance to the municipal building. He telephoned Talic, who was very angry at how the police acted. However, when Karabeg saw Talic sitting right next to Karadzic and Krajisnik in the front row at a ceremony in Banja Luka three days later, he said he knew what to expect.

And just as Mirzet Karabeg expected, he was arrested on 25 May and spent three months in a local prison and the Betonirka detention facility, where he was thoroughly "operationally processed." He was then sent to the Manjaca camp, from where he was "exchanged" two months later.

In the indictment, Momcilo Krajisnik is charged with persecutions with the objective of achieving "partial destruction of the Bosnian Muslim and Bosnian Croat national, ethnic, racial or religious group." According to the indictment, "the most extreme manifestations of this form of partial destruction took place in Bosanski Novi, Brcko, Kljuc, Kotor Varos, Prijedor and Sanski Most."