The trial of Momcilo Krajisnik, adjourned on 23 April, continued today with the testimony of two prosecution witnesses 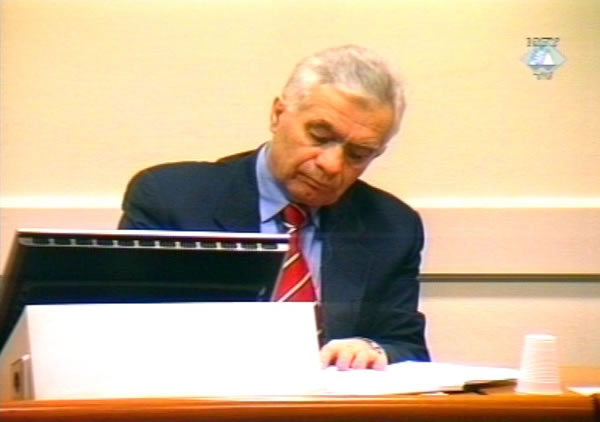 Momcilo Krajisnik in the courtroom
After a one-month break in the trial of Momcilo Krajisnik, the prosecution called a protected witness this morning. His testimony, according to prosecutors, is "relevant for all counts of the indictment." The charges are listed there in the following order: genocide, persecutions, extermination and murder, deportation and inhumane acts.

Witness 044 was forced to leave his home in a village in the Japra River basin near Bosanski Novi in early June 1992, together with about 8,000 Bosniak women, children and elderly. They were deported in cattle rail cars to a railway station near Doboj, where Serb soldiers separated about 700 men of military age from their families and took them back to the Mlakva stadium near Bosanski Novi. Witness 044 was among them. He spent 46 days in the stadium, which was turned into a detention facility with "inhumane conditions." He was released after he signed a statement that he was "moving out voluntarily," leaving all his "movable and immovable property to the Republika Srpska and the Novi municipality."

According to his testimony, the expulsion was conceived, planned and prepared much earlier. In early March, Witness 044 saw from his village of Suhaca a military helicopter land in the neighboring Serb village of Josava. Fifteen minutes later, two cars full of weapons passed him by, coming from the direction where the helicopter had landed.

At the same time, open pressure on the region’s Muslims to move out increased through threats and intimidation. The witness said the only result of negotiations between Sifet Bajramovic, the representative of Bosniak villages, and local SDS leaders to "eliminate tensions” was the ultimatum that "Muslims surrender unconditionally all weapons in their possession."

"That's what we did – down to the last hunting rifle, but tensions were not eliminated. Quite the contrary," the witness said. He testified that the day after the surrender of weapons, the "one-sided shooting" began. It lasted five weeks and ended with the shelling of the village, whose inhabitants "were not attacking anyone and were not defending themselves either." The last act in the plan to expel non-Serbs from the Japra River area took place in the Japra company. That’s where Serb soldiers and police took the area’s entire non-Serb population and deported them in cattle railcars. At least ten Bosniaks were killed in the "operation”: the first victim was the "unsuccessful" negotiator, Sifet Bajramovic. The witness’ statement to prosecutors was confirmed by an exhumation of a mass grave near Blagaj Japra: the remains of all the victims named by the witness have been identified.

The prosecution called another witness today: Mirzet Karabeg from Sanski Most. Sanski Most is the fifth municipality--after Brcko, Bratunac, Bosanski Novi and Bosanski Petrovac—for which prosecutors are presenting evidence. The indictment against Momcilo Krajisnik lists 37 municipalities in which the persecution of non-Serbs was "widespread and systematic."