Momcilo Krajisnik's defense counsel, British lawyer Nicholas Stewart, requests the presence of Chief Prosecutor Carla del Ponte at one of the hearings because he wants to "make some criticisms." The accused himself complains about Tribunal interpreters, the SENSE Agency, the Registry and, finally, his own defense counsel. 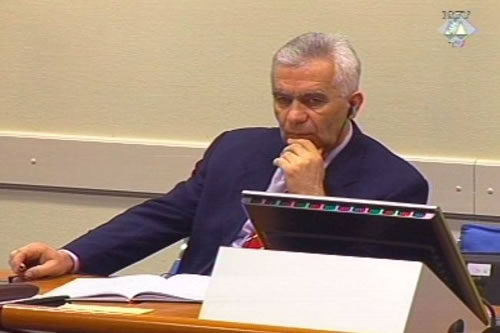 Momčilo Krajisnik in the courtroom
The trial of Momcilo Krajisnik, adjourned on 27 February, continued today in a rather unusual way. The defense counsel, British lawyer Nicholas Stewart, announced that he wanted to "make certain critical remarks" but that he should do it in the presence of prosecutor Mark Harmon and the Chief Prosecutor, Carla Del Ponte. The presiding judge took notice and expressed his hope that the Chief Prosecutor "could perhaps organize it" despite the fact that she is very busy.

After that, Krajisnik himself addressed the court. He said he wanted to "make certain suggestions, which are perhaps at the same time slightly critical" in order to "increase the efficiency of the trial." The criticism was addressed to Tribunal interpreters, the SENSE Agency, the Registry and his own defense counsel.

He said the interpreters "were not interpreting the proceedings correctly." Although he stressed that he did not speak English, Krajisnik stated that on at least one occasion during the simultaneous interpretation, the "sense of the text (in the original) was completely different." According to him, the reason is that the participants in the trial speak too fast. "[Prosecution expert witness] Treanor spoke fast, the interpreters did not interpret his words correctly and the sense of the words was completely bad," said Krajisnik, but did not explain in which sense the sense was bad.

The accused said that the audio interpretation of a Traenor’s statement, according to which "Momcilo Krajisnik proposed that the war be started", was broadcast in the Republika Srpska "through an agency that covers the trial here." Krajisnik failed to quote the statement but claimed that its sense was "completely different." Specifying that the agency in question is SENSE, "whose comments are completely wrong and improper," the accused Krajisnik asked that such interpretation be checked by the defense team or "for us, the other side, to be allowed to communicate with the public."

Judge Orie, who followed the proceedings via the English interpretation, was not clear as to who and what Krajisnik was actually complaining about, and those who listened to him in the Serbian original were not much clearer either.

Krajisnik then complained that the Registry had cut down the resources for his defense while the prosecution was able to send "an army of investigators" to the field, which then "visited each of our witnesses asking them to give statements."

At the end of his address, the accused stated that in his opinion, the defense was not prepared to conduct the cross-examination of expert witness Patrick Treanor and asked that the cross-examination be postponed for at least a month. "I have gone through the material and I know – I've lived there – that things are very complex down there," said Krajisnik. He asked the Trial Chamber to allow him to "assist the court" by clarifying "certain things” at the end of cross-examination.

Defense counsel Nicholas Stewart noted that "it was definitely not a fortunate situation" when a client states that the defense is not ready to start cross-examination after the lawyer has stated the opposite to the Chamber. The cross-examination did begin, with the option of allowing the accused to ask certain questions to the prosecution expert at the end.

Patrick Treanor, chief of the prosecution’s investigation team, testified in the second half of February about his report, "The Bosnian Serb Leadership, 1990-1992," in which he analyzed the development of SDS policy from the founding of the party and its coalition with the SDA and HDZ to its takeover of power and the ethnic cleansing of areas in BH declared "Serbian." In the period covered by his analysis, the prosecution alleges that Momcilo Krajisnik was one of the leading figures in the Serbian Democratic Party.

Revisiting some of the documents contained in Treanor's report, Stewart tried to show that Momcilo Krajisnik "was not an important person" in the SDS hierarchy. As proof of his claim, he stated that Krajisnik was not formally a member of the SDS Main Board but is mentioned in all the documents solely as Speaker--first of the BH Assembly and then of the Assembly of the Serbian People in BH. According to him, this has nothing to do with any function in the SDS.

Cross-examination of the prosecution witness will continue over the next few days.