WAS URBAN KILLED BY A SHELL OR DID HE DIE BECAUSE HELP ARRIVED TOO LATE? 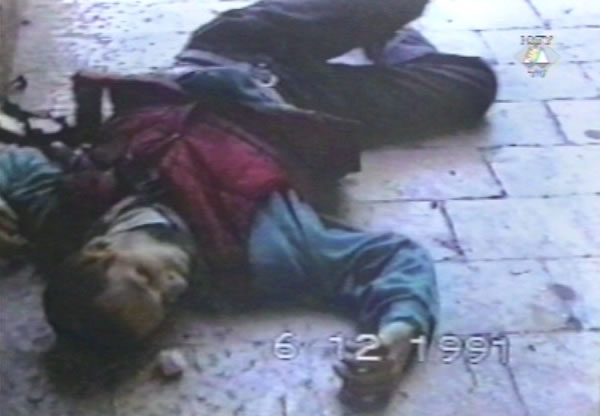 Pavo Urban body
Only one trial was set to continue today at the Tribunal – the one of General Pavle Strugar, accused of the shelling of Dubrovnik, but it was cancelled. No explanation or announcement of a new date were given.

The last prosecution witness who testified before the adjournment had his identity protected in addition to facial and voice distortion. Like so many previous witnesses, he described how he lived through the most intense shelling of the Old Town of Dubrovnik on 6 December 1991. Witness A was in his apartment in a house on the Stradun street. The roof of the building was hit by three shells. He spent most of that day hiding in the bathroom. He would dash out to the window from time to time to see what was going on in the town. On one occasion, he saw the body of his friend, the Dubrovnik photographer Pavo Urban lying on Stradun. In the indictment against General Strugar he is listed as one of the two civilians killed in the attack on the Old Town.

“I heard the voices of Urban's colleagues who were saying, 'Pavo's been hit.' When I looked out of the window, I saw a motionless, curled-up body beneath the town bell tower, but I could not see his face from the distance," witness A said.

General Strugar's defence challenged his testimony, quoting from a written statement given by Witness A to the investigators in 2000. In it he described the same incident, saying that he saw the moment when Urban was hit and an ambulance coming to get him

The defence counsel specifically asked the witness to explain how he knew that Urban died a few moments after he was hit, which he stated to the investigators in 2000. The defence claims that the photographer from Dubrovnik died of haemorrhaging because he did not receive aid for two and a half hours after he was hit.

“I do not know when the deceased actually died," Witness A replied.

In response to questions asked by the defence, the witness allowed in the end that it was possible that he described the details pertaining to the death of Pavo Urban not only on the basis of what he personally saw on 6 December 1991, but of what he later heard from the colleagues and friends of the photographer who had died.

Strugar's defence counsel, the Belgrade attorney Vladimir Petrovic at one point said that the witness only spoke "half of the truth", which prompted the prosecutor to object strenuously. The judge reprimanded him and the witness himself responded by saying,

“Sir, I have come here because I was prompted to do so by my conscience, to make things easier for everyone in the former Yugoslavia. To finally remove the anathema from the region and so that all of us, all the peoples, including Serbs and Montenegrins, can finally live in normal countries, not to slaughter each other every half a century. This was my main goal in coming here… I did not come here to lie because I bear ill-will towards your client. I do not know that person at all and I wish him all the best. Let him be judged by those whose job it is to judge. I am not judging anyone. I am telling the truth. Your Honours, I had to say this.”