HOW THE PEOPLE OF DUBROVNIK PREPARED TO "WELCOME THE JNA"

Djelo Jusic insisted that pouring the "hot oil" over the conquerors of Dubrovnik was the only potential weapon he had heard of, despite the claims by General Strugar’s defense that there were Croatian Army units in Dubrovnik and that the witness’s brother Mujica joined those units. 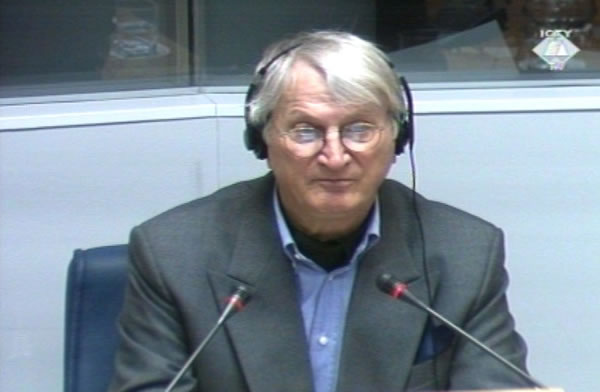 Djelo Jusic, witness at the Pavle Strugar trial
Famous Dubrovnik composer and conductor Djelo Jusic ended his three-day performance before the Tribunal in The Hague during which he testified about what he had been through, seen and recorded with his video camera in Dubrovnik in the fall of 1991. Video tapes Jusic made during and the day after the shelling of the Old Town of Dubrovnik, on 6 December 1991, were shown before the court. General Pavle Strugar, who was the commander of the Second Operational Group of the JNA and who commanded the attack on Dubrovnik at the time, is charged with the shelling. As Jusic walked around Stradun and adjacent streets in the heart of the Old Town on 7 December 1991, he recorded the damage to the monuments, walls and roofs of buildings, churches, monasteries and museums.

In their cross-examination, the defense challenged the authenticity of the recordings, since Jusic had given the prosecution only nine and a half minutes of the material recorded on the 6 December. Jusic said he has "cut out the long pauses when nothing was happening". The defense lawyer insisted that the footage "had been edited" and that the events on tape were not in chronological order, which the witness confirmed. "The most important thing for me was to show that Dubrovnik and myself were fired on, and the dates were not important for me," said Jusic.

In response to the questions posed by Vladimir Petrovic, lawyer from Belgrade, Jusic kept repeating that in the course of the attack on Dubrovnik he had not seen any weapons or uniformed and armed Croatian soldiers. He also said that his brothers – Kemal, Ibrica and Mujica – had not been involved in the defense of Dubrovnik. However, the defense produced a statement made by Mujica Jusic to the OTP in 2000 in which he confirmed that on 12 October 1991 he had joined the Croatian Army and had taken part in the defense of Dubrovnik.

"This is the first I hear about it," said Djelo Jusic, claiming that he never spoke about that with his brother and that in fact he did not see him during the three months of siege. "If that is true," the witness added, "I consider my brother a hero now and I admire him for defending his children and his home." When the defense asked Djelo if this meant that "after thirteen years he heard for the first time that his brother was a hero," Jusic replied in the affirmative.

Asked by the defense whether Dubrovnik was a defended town, the witness replied that it was - not by arms and troops, but by the "will of its people". The JNA forces could have strolled into town easily, like a parade “with an orchestra", Jusic said adding that "old people were getting ready to pour hot oil on them, just like in the Middle Ages. That's the only weapon I have heard of."