After examining the accused general Strugar, the experts appointed by the prosecution reached conclusions contrary to those of the experts whose findings the defense uses to move for the suspension of the trial. 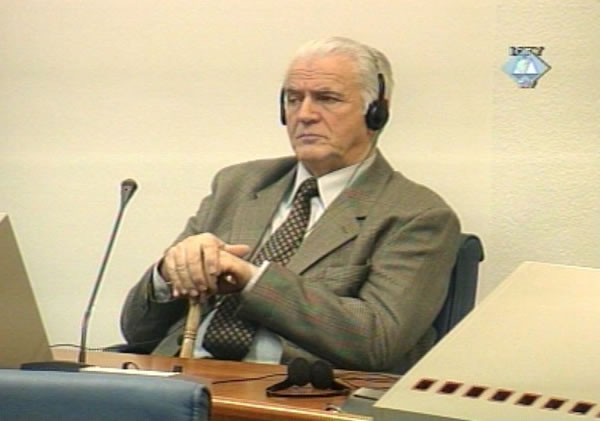 Pavle Strugar in the courtroom
General Pavle Strugar is competent to stand trial – that is the conclusion reached by a team of Dutch psychiatrists after an examination of the accused carried out a few days ago. The purpose of the examination was to determine whether the accused is capable of following the proceedings and understanding what is being discussed in the courtroom.

The examination was ordered by the Trial Chamber after last month the defense presented the findings of a Belgrade psychiatrist indicating that the accused was not competent to stand trial because he suffers from vascular dementia, depression and post-traumatic stress disorder.

The report filed by the experts appointed by the prosecution – two neuropsychiatrists and a geriatric psychiatrist – confirms the diagnosis of dementia but challenges the findings of depression and post-traumatic stress disorder.

At the beginning of the hearing today, the defense and prosecution exchanged arguments about what would have to be done, in their view, prior to the final ruling of the Trial Chamber on the competency of the accused. Deeming that the report by the Dutch psychiatrists was "perfunctory and one-sided", the defense is of the view that a hearing should be held at which the defense would have the opportunity to cross-examine the experts appointed by the prosecution. The prosecution is opposed to the notion, saying that no hearing is necessary and that the Trial Chamber is able to make its decision on the basis of the ample reports filed by the eminent Dutch psychiatrists.

As the presiding judge announced today, the Chamber will in all probability decide tomorrow whether a hearing would be held or whether it would make the final decision on the competency of the accused – in fact, about whether the trial would go on – on the basis of the medical file.