THE THREE GOALS OF CAPTAIN “RAMBO”

According to Admiral Miodrag Jokic, the shelling of the Old Town of Dubrovnik on 6 December 1991 was not a "spontaneous action". Instead of an investigation and punishment for those responsible, early promotions were given to Captain "Rambo" and the other participants in the JNA Dubrovnik operation. 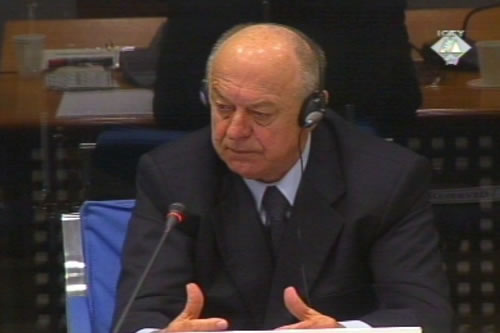 Miodrag Jokic, witness at the Pavle Strugar trial
“After the attack on Dubrovnik on 6 December 1991, no one in the JNA, from the General Staff down to the subordinate commands, wanted a detailed and comprehensive investigation to be conducted," Admiral Miodrag Jokic said as his examination-in-chief at the trial of General Pavle Strugar drew to a close.

At the time of the Dubrovnik operation, Admiral Jokic was the commander of the 9th Naval Sector of the Yugoslav Navy, and as such he was subordinate to the commander of the Second Operational Group, General Pavle Strugar. Admiral Jokic claims that the shelling of Dubrovnik on 6 December 1991 "was not a spontaneous action", a response to the fire opened by the Croatian forces stationed on the Srdj hill.

According to Jokic, the attack which was ordered "willfully" by the commander of the Third Battalion of the Trebinje Brigade, Captain Vladimir Kovacevic nicknamed Rambo had a triple objective: reprisal for the soldiers in his unit who had been killed and wounded; revenge on his former commander, Nojko Marinkovic who had left the JNA and headed the defense of Dubrovnik, and thirdly "causing damage to the Old Town". Although the captain claimed that he had merely responded to the provocations by the Croatian side, the preparations for a large-scale artillery attack which began at dawn on 6 December 1991, had to be carried out the day before.

When the news of the attack reached the JNA General Staff, Admiral Jokic and General Strugar were summoned to report immediately to General Veljko Kadijevic, the then Defense Minister of the SFRY. As Admiral Jokic testified today, General Kadijevic was "very angry" and reprimanded them, saying that they had "acted very unwisely, allowing themselves to be provoked, and that now the situation had to be resolved in a wise manner."

Despite Kadijevic's anger and his urge to "resolve the situation wisely", the shelling of Dubrovnik continued until Jokic and Strugar returned from Belgrade. According to the official JNA version, fire was ceased some time around 14:00 hours, while according to the information of the Dubrovnik Crisis Staff, the shelling continued until 16:30 hours. "The truth lies somewhere in the middle." said Jokic today.

On his return from Belgrade, at a meeting in the headquarters of the 2nd Operational Group in Trebinje, Jokic proposed that an apology be made for the shelling of Dubrovnik. General Strugar replied that the JNA "would not apologize to anyone, since this was a provocation of the extremists from the Srdj hill who were attacking the Third Battalion and the commander launched an attack to avenge those of this soldiers who got killed and wounded." Thus the official version of the attack on Dubrovnik, which was in fact "Rambo's version" was agreed upon, and that was the version Admiral Jokic presented at a press conference in Kupari later that day.

When the prosecutor asked him why he did not conduct an investigation into the responsibility of Captain Kovacevic who was his direct subordinate at the time, Admiral Jokic said that he could not do anything without an order from the 2nd Operational Group, commanded by the accused general Pavle Strugar. "At the JNA level", he repeated, "there was no intention to conduct any investigation whatsoever." Instead, a week after the shelling of the Old Town of Dubrovnik which had made him so angry, General Kadijevic signed a decree promoting Vladimir Kovacevic "Rambo" to the rank of captain first class. It was an early promotion, because of his role in the JNA Dubrovnik operation. The commander of the operation, Pavle Strugar, had also received his promotion some time before – he was made a four-star general.

The defense is expected to start the cross-examination of Admiral Jokic on Wednesday.