New testimony on the effects of the shelling of the Old Town of Dubrovnik on 6 December 1991. From the public gallery, psychiatrists retained by the prosecution monitor the responses of the accused General Pavle Strugar. 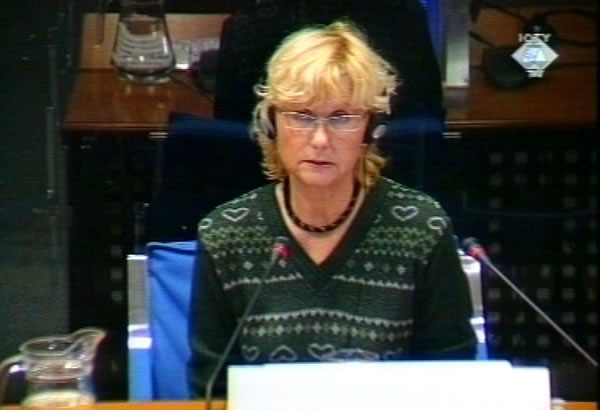 Zineta Ogresta, witness at the Pavle Strugar trial
"We heard a terrible noise. At one point, the roof started caving in and we thought we would die a most horrible death. It is horrible to die young, and not being able to see the faces of those who are killing you."

This is how a native of Dubrovnik, Zineta Ogresta, felt during the shelling on 6 December 1991, when her house on the Stradun street, in the heart of the Old Town of Dubrovnik, was destroyed an burned. The then commander of the JNA Dubrovnik operation, General Pavle Strugar, is charged with the shelling.

The images of the destroyed and burned-down house on Stradun were shown previously in the trial of General Strugar and in the trial of Slobodan Milosevic, who also stands accused of the attacks launched by the JNA on the UNESCO-protected town. In the course of her testimony, Ogresta indicated the angles of impact of the shells and the damage to stone ornaments and coats of arms on the protected palace in Dubrovnik.

On the 6 December 1991, the detonations started at around 5,30 a.m. As the witness said, "they seemed to be coming from all sides". Through a window facing north she saw explosions around the transmitter located on the Srdj hill above Dubrovnik. Then a shell flew in through a second-storey window, the roof started caving in and the house caught fire.

Zineta Ogresta went to the ground floor with her sister and a neighbor, because they believed they would be safer inside the stone entrance to the palace. She took only her jacket with her, because "there was such a tremendous noise that I thought I would go deaf and I put the jacket over my ears.", while "shrapnel rained all around". At around 10 o'clock, the upper part of the building was hit again, this time by a "guided shell". They ran out of the house and crossed to the other side of the Stradun street. From there, they watched, as she described, an "incendiary rocket" fly in through a window of her apartment. After the explosion, first the Venetian blind caught fire and then fire engulfed the entire apartment. Firefighters arrived soon and tried to put the fire out, but to no avail. Only bare, charred walls bearing damage from shell impacts, remained of the house.

In their cross-examination, the defense for General Strugar asked Zineta Ogresta – just as they have all the other prosecution witnesses in the course of the trial so far – about the presence of the Croatian forces inside Dubrovnik and their weapons. Just as her predecessors in the witness stand, she also categorically denied the presence of any military or police or armed civilians in the Old Town. She said she did not know if there had been any outside of the town walls. She did hear about the "defenders of Dubrovnik", but she did not know who they were and where their positions were. She could not answer the question put to her by the defense why the JNA had not entered the town … if between its positions on the Zarkovica hill and Dubrovnik "there was nobody to defend the town."

Three psychiatrists retained by the prosecution to verify whether General Strugar is fit to stand trial followed part of the proceedings from the public gallery. This follows the report of a Belgrade psychiatrist filed by the defense, according to which the accused suffers from vascular dementia, depression and post-traumatic stress. At the beginning of the week, they questioned the accused general in the Detention Unit, and now they wanted to gauge his responses to the developments in the courtroom