In the first round of closing arguments, the prosecution claims it has proven beyond reasonable doubt that in 1999 over 800,000 Kosovo Albanians were expelled and thousands killed in a joint criminal enterprise headed by Slobodan Milosevic. The accused Milutinovic, Sainovic, Ojdanic, Pavkovic, Lazarevic and Lukic were part of the joint criminal enterprise 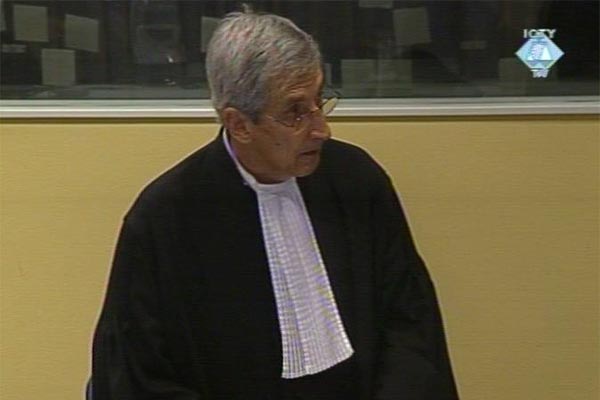 Thomas Hannis, prosecutor in the Tribunal
After a two-week summer recess, the first working week at the Tribunal started with the prosecution delivering its closing arguments at the trial of six former Serbian political, military and police officials charged with deportation, murder and other crimes against Kosovo Albanians in 1999. Prosecutor Hannis believes that in the two years of the trial they have managed to prove that all the accused participated in the joint criminal enterprise aimed at changing the ethnic structure of Kosovo through the deportation and killing of Albanian civilians; this was to result in the establishment of the full Serbian control over the province.

The prosecutor noted that the plan to ethnically cleanse the Albanians existed at least from October 1998. As he put it, the NATO campaign was used as a front for the deportation and killing of Kosovo civilians. The prosecution sees Slobodan Milosevic, the then president of the FRY as the ringleader of the criminal joint enterprise. This is corroborated with the evidence of Klaus Naumann, the former president of the NATO Military Committee. Naumann claimed that Milosevic told him and Wesley Clarke, the then NATO commander, on 24 October 1998 that the Kosovo problem would be dealt with according to the model implemented in Drenica in 1946, when Albanians were put together in a single location and killed.

The Serbian authorities actually opted for this solution in the first few weeks of NATO campaign when mass murders of Albanian civilians were committed in a number of locations in Kosovo, the prosecution claims. Prosecutor Kravetz noted that the atmosphere of terror and fear in the province culminated when some 800,000 Kosovo Albanians fled to Albania and Macedonia. The crimes were committed following a well-established pattern, the prosecution contends. First, the army shelled the villages, then the police and other formations entered the villages, killing, looting and expelling civilians. Their documents were taken away from them when they reached the border.

The prosecution reminded the court that many of the mass killings took place in locations where there were no combat operations and that there were many women and children among the victims. This challenges the argument presented by the defense of the six accused that the victims were either KLA members or died in the cross-fire in combat operations conducted by the Serbian security forces against Albanians rebels. Key evidence showing that those were not ‘legitimate targets’, the prosecution contends, is the fact that the bodies were transferred after the murders and then hidden in mass graves in several places in Serbia.

Speaking about the individual responsibility of the accused, the prosecutors first dealt with the former Serbian president Milan Milutinovic. Milutinovic’s role, they contend, ’was not just window-dressing’, because he was in a position to prevent the crimes against Kosovo Albanians. The prosecution believes it has proven beyond reasonable doubt that Nikola Sainovic, then deputy prime minister in the federal government, followed Slobodan Milosevic’s orders in establishing ’political control’ over forces that committed crimes. The actions were implemented, the prosecution concluded, in the spring of 1999 following the directives issued by Dragoljub Ojdanic, the third-accused chief of the VJ General Staff.

The prosecution will complete closing arguments tomorrow with the arguments about the role of the other three accused – military generals Nebojsa Pavkovic and Vladimir Lazarevic and Sreten Lukic, the commander of the police staff for Kosovo. At the end, the prosecutor should indicate what punishment it calls for if the accused are found guilty.