General Milan Djakovic, witness called by the Trial Chamber at the Kosovo Six trial, claims that the term ‘joint command’ was coined by him and his commander Nebojsa Pavkovic to avoid other formulations that were too long. This body didn’t have any command role, despite the implication inherent in the ‘abbreviation’ 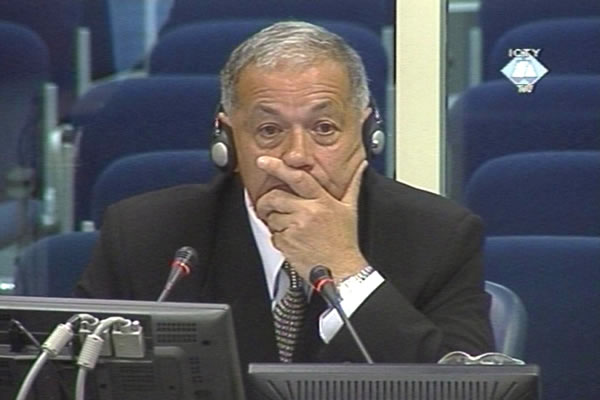 Milan Djaković, witness at the Kosovo six trial
After both parties rested their cases at the trial of the Kosovo Six, the Trial Chamber called retired VJ general Milan Djakovic, former chief of operations department in the Pristina Corps and the 3rd Army, to further clarify the role of the joint command of the army and police for Kosovo and some other controversial issues. Djakovic is the person who signed the minutes taken at the joint command meetings from July to October 1998.

In its case, the prosecution claimed Slobodan Milosevic used the Joint Command to implement his plan for the ethnic cleansing of Kosovo, appointing Nikola Sajnovic, a man he trusted, as its head. As alleged by the prosecution, three of the accused – military generals Nebojsa Pavkovic and Vladimir Lazarevic and police General Sreten Lukic –participated in the work of this body. Contrary to that, the defense was arguing that this body never actually existed. The meetings of the police and army in Pristina were erroneously called the Joint Command. In 1998, Sainovic and other high-ranking political officials attended those meetings. Djakovic more or less concurred with that today, saying that Sainovic informed those present only about the activities of the federal authorities in the sphere of foreign affairs. In his words, the meetings were held for the MUP and the army ’to exchange information’ about the developments in the field.

When the presiding judge observed that it is ‘hard to understand’ why the term ‘command’ was used in such a situation, Djakovic offered his explanation. His first proposal to Pavkovic was to indicate the minutes were taken at the meetings of the MUP Staff and the Pristina Corps commands but Pavkovic objected it was ‘too long’. They agreed to shorten this formulation to the ‘joint command’. In his view, the same term was used in 1999 in the orders issued to the army and the police, ‘by a sort of inertia’. Retired VJ colonel Milan Kotur testifying in the defense of General Lazarevic provided another, rather original explanation why the term was used. According to him, in Serbia it is a custom for ‘the godfather’s word to be respected’ and no one wanted to change the name Djakovic and Pavkovic had given as ‘godfathers’.

Speaking of the line of reporting in the military in 1998 and 1999, Djakovic said that it remained intact and went from the Pristina Corps command headed by General Vladimir Lazarevic to Pavkovic’s 3rd Army and further on to the General Staff in Belgrade. The chief of the General Staff was General Dragoljub Ojdanic, yet another of the six accused.

As today’s hearing drew to a close, the prosecutor started his cross-examination. Tomorrow the witness will be cross-examined by the defense teams of the six accused. The cross-examination by General Sreten Lukic’s defense is expected to be the longest and toughest. Djakovic identified Lukic as the person in command of the police in Kosovo and of ’the PJP units in particular’. According to the prosecution witnesses, PJP special police members participated in the murder of Albanian civilians and their expulsion from Kosovo.