WITNESS: ALLAH WAS INVOKED IN FRONT OF BOBAN

Newly appointed judges in Herceg Bosna had to take an oath of office before the HZ HB president Mate Boban, but the final invocation depended on their religious beliefs. According to the witness, atheists ‘could skip’ the conclusion ‘so help me God’ if they wanted to, while Muslims could say instead ‘so help me Allah’ 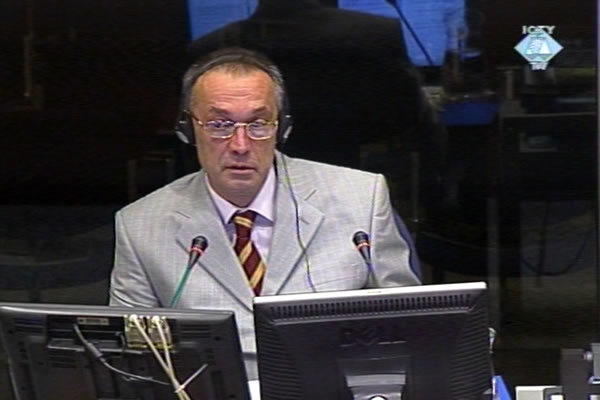 Zoran Buntic, defence witness of Jadranko Prlic
On the eighth day of his evidence in the defense of Jadranko Prlic, Zoran Buntic, former chief of the Justice and General Administration Department in Herceg Bosna, claimed that the Muslim judges and prosecutors were not forced to take an oath to protect ‘the state system of the HZ HB’, and to end the oath with the words ‘so help me God’.

The witness contends that the newly appointed judges and prosecutors who were atheists ‘could simply skip’ the invocation, while the Muslims could take the oath in accordance with their religious beliefs, concluding it with the words ‘so help me Allah’. In his words, ‘nobody could be relieved of their duty’ because they failed attend the oath-taking ceremony before its author, the then HZ HB president Mate Boban.

When prosecutor Douglas Stringer brought up the case of Aid Glavovic, a Muslim judge who was relieved of his duty in 1993 just because he didn’t want to take that oath, the witness replied that such claims were ‘pure lunacy’. According to him, Glavovic ‘resigned’ because a family member was ill.

The prosecutor then went on to show the witness two documents: a report drafted by the witness where he says that Glavovic was ‘relieved of his duty’ and Glavovic’s statement to the OTP investigators from 2002, where Glavovic says he was fired after he refused to take the oath to follow the policy of HZ HB which ran contrary to his religious beliefs. He also named two other judges who had refused to take the oath and were subsequently fired: Semir Puzic and Mahmut Jugo.

Buntic’s reply to this was that in his view Glavovic would never give such a statement ‘with all his wits about him’. ‘He must have received threats, I don’t know what kind of threats’, the witness added. Buntic’s evidence at the trial of six former Herceg Bosna officials is expected to finish tomorrow.